It's on in Frankfurt: Frankfurt laps go for the second time
from FFM Aktuell 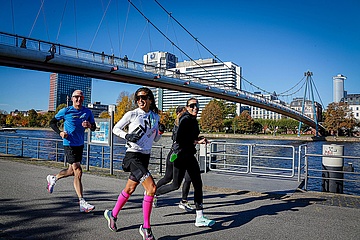 Last year, many of the major sporting events in Frankfurt had to be canceled. But instead, a new running event could celebrate its premiere: in October 2021, the Frankfurt Rounds powered by Mainova went to the start for the first time. On May 29, the second edition is now in the starting blocks to further promote popular sports in the city.

Because Frankfurt is an important sports city in Germany. There is a wide range of clubs in addition to the major events such as the cycling race on 01 May, the marathon in October or the Ironman. Thus, Frankfurt is an important center for competitive sports in the whole of Germany. With the city of Frankfurt, the Frankfurt Rounds powered by Mainova have now gained a new strong partner. With the support of the Frankfurter Runden powered by Mainova, popular sports in Frankfurt am Main are to be given even more impetus. After all, popular sport is considered an important indicator of a livable city.

This was somewhat slowed down by the pandemic, but a running event like this can tie in with the goal of promoting popular sport in Frankfurt to the fullest extent. That's why Mike Josef, as Frankfurt's head of sports, is taking on the patronage of the event this year. "The Frankfurt Rounds are a great addition to our range of sports. Anyone and everyone can simply lace up their running shoes and decide for themselves how many laps they want to do. Together with many others, on this wonderful route in the heart of our city," says Mike Josef.

Björn Steinmetz, head of the Frankfurt Laps powered by Mainova, is enthusiastic about the strong signal from the city: "We are very pleased that Mike Josef, as head of the sports department, is taking over the patronage of the event. This sets a great example and underlines the importance of our event as a mass sports event in the heart of Frankfurt."

The beauty of this event is that it is aimed at all sports enthusiasts - whether casual runners or professionals. Therefore, the motto is also: "Anyone can run". Participation is very simple. All you need is a pair of running shoes and a short registration via the event's homepage. A particularly attractive feature is the personal choice of course length. It allows participants to decide during the run how many kilometers they want to complete.

The running route is really beautiful, because it runs along the banks of the Main River in Frankfurt. On a ten-kilometer circuit along the water and between meadows and trees, participants are allowed to complete as many laps as their daily form allows. This guarantees an individual adjustment of the course length and enables an event that adapts to the needs of its participants. Thus, the Frankfurt laps powered by Mainova offer the ideal opportunity for all interested parties to test their own performance in the context of an event together with like-minded people.

For all those who want to prepare early for the event or already sniff a little competition air, there will be a joint training run with patron Mike Josef on Friday, April 22, from 9:30 am. Here the distance can be tested already times together and the own running performance be examined.

Further information to the meeting and the training run with Mike Josef follow on the homepage of the event at frankfurter-runden.de and via the associated Facebook and Instagram pages of the Frankfurter Runden powered by Mainova.

So it's "Get in your running shoes and out on the track!" when the popular sport in Frankfurt finally gets a broader offer through the new format and gets the city moving.