James Blunt returns to Frankfurt in 2020
from FFM Aktuell 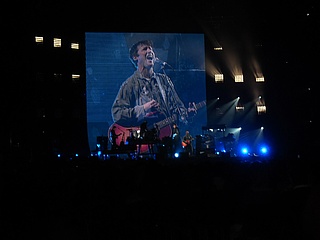 Some love him, others have little to do with his music. But even his sharpest critics have to smile when James Blunt reacts to criticism with a lot of self-irony. The musician lets his very own humour flash through again and again during his live appearances, which always makes a James Blunt gig a very entertaining affair. If you want to see for yourself, you get the opportunity to do so again in 2020. Because then James Blunt comes back on a big tour, which will also take him to Frankfurt.

When the "Once Upon A Mind" tour is as successful as his last guest appearances, fans can look forward to a great concert in the Frankfurt Festhalle on 19.03.2020. At the 2014 performance in Frankfurt Blunt enthused with a successful mixture of current songs and hits from his now almost 15 years lasting career. Between the songs the singer enchanted his audience with a lot of wit, charm and just this self-irony, which makes him so sympathetic.

Before his tour, the album "Once Upon A Mind" will be released on October 25th. The single "Cold" is the first convincing foretaste of this album. After he flirted with electronic sounds on his last album "The Afterlove" - which didn't convince all fans - Blunt returns with the new songs to what he masters like hardly anyone else: writing timeless songs that touch both heart and head. It is exactly this spritziness of "Cold" that characterises the other ten songs on "Once Upon A Mind", his sixth studio album. Rich in highlights, including the moving ballad "Monsters", the pop coolness of "5 Miles" and the country-coloured "Halfway".

"I think this is the most honest album I've ever made," says James Blunt proudly about his latest work. "Back To Bedlam' was similar in that I had been writing about my life experiences at the time for a while and they came together on my debut. And every song on this album stands for something I'm currently experiencing or have experienced more recently. It's a very personal album and I'm proud to share it with the world."

We are really looking forward to the new songs and the upcoming concert!