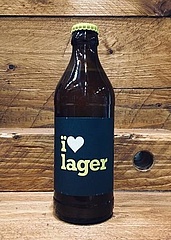 na&iuml;v celebrates its 5th anniversary and Glaabsbräu celebrates with it: To celebrate its birthday, na&iuml;v is releasing &iuml;love lager in a bottle, co-developed and brewed by Glaabsbräu. Run by the ninth generation, Glaabsbräu is the oldest brewery in southern Hesse and one of the most modern breweries in Germany, with a unique brewing philosophy. &iuml;love lager is as a craft beer "without drinking resistance" slim like a pilsner and yet very fruity. The beer has 5.6% alcohol.

"Sascha Euler and Christian Daam took a bold step with na&iuml;v five years ago. With their innovative concept, they enrich the gastronomy scene in Frankfurt and Rhein Main and provide a very nice variety of beers, which is unfortunately often not given in the classic gastronomy," emphasizes Robert Glaab, head of brewing. "With Julian Menner and the Glaabsbräu we have realized our dream of our own beer. Initially, our "&iuml;love lager" was intended exclusively for our bar. The very positive feedback has moved us to offer our craft beer in bottles.", tells Sascha Euler.

"After we already offer our own beers on tap and in bottles at na&iuml;v, it was a great recognition for us to be chosen as the brewery for the new beer. Glaabsbräu stands for a natural brewing process and creativity. This is unique in Hesse," reports Julian Menner, master brewer at Glaabsbräu, who regularly offers beer seminars at na&iuml;v. &iuml;love lager has already been on tap since the end of May 2018 and is now also available in 0.33l bottles.