Joy at Frankfurt Zoo - The Humboldt penguins are here!
from FFM Aktuell 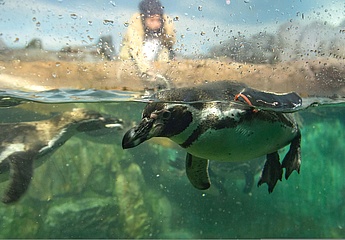 (ffm) 19 new penguins have moved into the Exotarium. But only temporarily! Because in spring they will take possession of their new outdoor enclosure. The work there is entering the final round. Before the Humboldt penguins could come, however, the gentoo penguins had to leave the zoo after 61 years.

"In December 2016, the first excavator broke ground, marking the start of construction of the new facility for the Humboldt penguins. The fact that the first animals are now here in Frankfurt is a sure sign that it can't be long before the facility is completed. The opening is planned for next spring, and I am very much looking forward to the moment when we can hand it over to the public," said Ina Hartwig, Head of the Department for Culture and Science.

The new Humboldt penguins come from different zoos: seven from Landau, four from Schwerin and eight from Rheine Nature Zoo. In January, six more will follow from the Beauval Zoo in France. "They are not supposed to stay in the Exotarium for too long," says Stefan Stadler, head of the zoo's scientific department, explaining, "As soon as the so-called separation building on the new enclosure is completed, the animals will move in there and stay until all the construction work is finished. In the building, which is not in the visitors' area, they have enough space and access to a water basin. Here they can settle in quietly and get to know each other before moving to the large outdoor enclosure in the spring."

Their predecessors, the Gentoo penguins, had been on display at Frankfurt Zoo since 1957. The ten residents of the now aging facility at the Exotarium moved all together to the Wuppertal Zoo on December 11. Humboldt penguins (Spheniscus humboldti) belong to the genus Spheniscus, which includes four of the 18 penguin species. According to the Red List of the World Conservation Union IUCN, they are considered endangered.

Ten years ago, the nature conservation organization "Sphenisco - Schutz des Humboldt-Pinguins e.V." (Sphenisco - Protection of the Humboldt Penguin) was founded in Landau in the Palatinate region of Germany, which is specifically concerned with environmental education and the preservation of breeding areas in Peru and Chile that are threatened by human activities. Frankfurt Zoo joins many other zoos in supporting this important project.

Further information can be found at Http://www.sphenisco.org