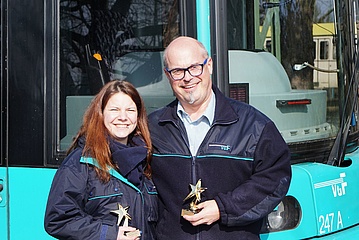 (ffm) On Saturday, 5 May, the time had come: Stuttgart hosted what is now the seventh European Tram Championship, the European championship for tram drivers. 25 teams from all over Europe competed. Andrea Ramsthaler and Jens Buchhold started for the VGF; with clear success: In the overall ranking, the Frankfurt team took second place; in the women's individual ranking, Andrea Ramsthaler even took first place and thus became European champion. The disciplines again included the popular tram bowling, in which the teams use their tram to hit a large ball onto huge plastic cones.

Andrea Ramsthaler and Jens Buchhold had prevailed in an internal VGF preliminary competition and travelled to Stuttgart, accompanied by team coach Andreas Bernhardt. Last year, the VGF team had already made it onto the winners' podium. Sandra Kuhn and Thilo Korbien took third place in Tenerife in 2017

The VGF would like to thank them for keeping their fingers crossed and congratulate their team!

Frankfurt-Tipp.de joins in of course!