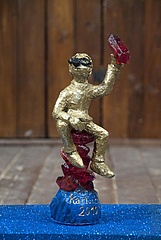 (kus) The Karfunkel jury has announced its decision on the eighth award of the Frankfurt Children's and Young People's Theatre Prize: The 2017 Karfunkel is awarded to Liora Hilb with her theatre La Senty Menti. Her play &sbquo;remembeRING', which premiered at the Frankfurt Theaterhaus in February 2016, receives special recognition.

The young Frankfurt director and actress Sarah Kortmann is honored with a Jury Prize for Promotion. With &sbquo;My Malala', premiered at Frankfurt's youth culture church Sankt Peter, she has produced a play for teenagers and young adults for the second time after &sbquo;Fack ju Henry'.

The jury chairman, Ina Hartwig, head of the department of culture, says: "The Frankfurt actress and children's theatre maker Liora Hilb is firmly anchored in the Frankfurt children's and youth theatre scene with her high-quality work. With &sbquo;remembeRING', she has succeeded in combining a theatrical pedagogical approach with a play that appeals equally to older children, young people and adults. The Frankfurt Children's and Young People's Theatre Prize promotes the groundbreaking work of theatre-makers who deal with the realities of young audiences' lives. Hilb gives great space to the emotions of young viewers, her play opens up to the questions that touch our society at its very core."

The jury unanimously voted to honour Liora Hilb's work with the 2017 Karfunkel. Her current production &sbquo;remembeRING' is, they said, "an immensely layered, dense, demanding but never overwhelming piece". The play deals with Hilb's family history before, during and after the Holocaust and raises questions about racism, exclusion and violence right up to our present day. The prize jury particularly emphasized the clever realization of the collage-like production, which makes use of a variety of theatrical means.

In addition to this main prize, which is endowed with 10,000 euros, the jury took the opportunity to award a promotional prize of 5,000 euros to Sarah Kortmann. Her current production &sbquo;My Malala' shows how skilfully Kortmann knows how to translate large and difficult themes for a young audience. In the production, Kortmann develops an account of Nobel Peace Prize winner Malala Yousafzai's life story that "also allows for questions beyond the heroic image". The jury emphasized Kortmann's theatrical pedagogical work. Her work is characterised by "freedom, individuality and open spaces for interpretation".

The award ceremony will take place on Tuesday, 7 March, as part of the international theatre festival for young audiences Rhine-Main &sbquo;Strong Plays' in the Kaisersaal of Frankfurt's Römer.