Justitia is back - fountain season starts on Römerberg
from FFM Aktuell 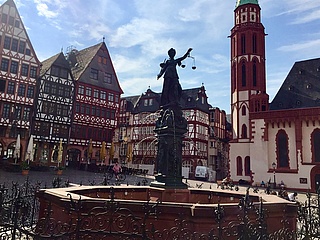 For many months, Frankfurters and tourists had to do without one of the city's most popular photo motifs. After the pipes in the figure had been damaged by acid last year, the Justitia had to be extensively restored. But now the Fountain of Justice on the Römerberg is complete again. And so, on Tuesday, June 2, Mayor Peter Feldmann and Ina Hartwig, Head of the Department of Culture, were able to open the 2020 fountain season in keeping with their status. More fountains in the city will follow in the coming days and will bubble again.

The start of the fountain season is a popular event in Frankfurt every year, as it heralds the start of summer in the city. But this year it is really something very special. Lord Mayor Peter Feldmann is well aware of this, and he remarked: "The people of Frankfurt have missed their justice, so much the greater is my joy that she is back now, at last. She is known far beyond the borders of our hometown and is a really popular photo motif. Justitia simply belongs on our Römerberg," says Feldmann. "Worldwide, the Fountain of Justice is one of the few fountains dedicated to the Goddess of Justice. A remarkable detail of the Frankfurt Justitia is the absence of the usual blindfold."

Department of Culture Hartwig added: "Together with the Justitia, the ornate wrought-iron ornamental grating can be seen in its full splendour again. This completes all the work around the fountain, which was carried out in close cooperation with the city's office for the preservation of historical monuments. I would like to thank the association &sbquo;Freunde Frankfurts' very much for their support in the restoration of our landmark. For more than 90 years, they have been committed to the cultural heritage of our city and we are grateful that they have contributed to the preservation of important architectural monuments in the city."

"With our initiative for the restoration of the Justitia Fountain and by assuming the costs incurred, the Friends of Frankfurt wanted to save an important, endangered work of art - and at the same time remind us that the fountain has promised justice to the citizens for more than 400 years," explains Barbara Deppert-Lippitz, Chairwoman of the Board of the Friends of Frankfurt Association.

Finally, work on the steps of the fountain was completed and, in agreement with the city's office for the preservation of historical monuments, 16 square sandstone bollards were placed around the fountain. They are intended to protect the fountain from shunting delivery traffic and at the same time serve as seating for visitors to the Römerberg. From now on, you can watch the Justitia spitting water again.

Due to the Corona pandemic and the associated restrictions, the start of the fountain season had to be postponed from April to May. The responsible public health department of the city of Frankfurt gave the green light for the start of operations, as the virus cannot be transmitted via the water and the wells are chlorinated. To be on the safe side, however, the distance regulation should also be observed at the wells and a face mask should be worn. Bathing is strictly forbidden, even before the pandemic has turned public life upside down.</The Justitia - More than just a popular photo hotspot The Justitia in Frankfurt looks back on an eventful history. In 1543, Frankfurt's first reed/spring fountain was built on the Römerberg. The sandstone parapet still partly originates from the year 1542.</p>

1610 the fountain was redesigned and got its present appearance: a stone fountain stick with a Justitia. Two years later, red and white wine flowed from specially attached eagle and lion heads for the coronation of Emperor Matthias. In their enthusiasm for the public bar, the people of Frankfurt battered the fountain to such an extent that the magistrate of the city had an additional fountain erected as a wine dispenser for the coronation of Emperor Ferdinand II in 1619.

1863 the Fountain of Justice was in such a desolate state that it disappeared under cascades of flowers on the German Princes' Day, and later it was hidden under a shack. The Justice Fountain was stolen more than once, in 1874 it was itself so battered that it was removed. In 1887 a donation from the wine merchant Gustav Dominikus Manskopf made the renewal of the figure possible. The ornamental lattice with the gilded city eagles, which still exists today, was made by Alexander Linnemann in 1887, the year of the renewal.

The fountain and figure were largely spared from the bombardment of the Second World War. From 1945 to 1947, the Justice Department stood in the rooms of the military government, which resided in the building of the Metallgesellschaft on Reuterweg. In 1970 it moved again - because of the construction of the underground railway and the underground car park, the ensemble was taken down and rebuilt only a few metres away from its original location after completion of the work.