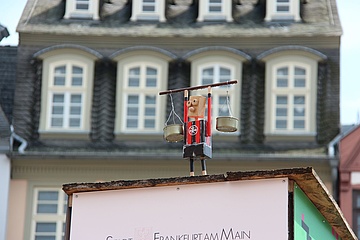 He is only 50 cm small and yet already a very big star: the little wooden man in the Eintracht outfit celebrated Eintracht's cup victory together with thousands of fans on 20 May. The wooden boy, who was enthroned on the pedestal of the Fountain of Justice and was therefore soon christened Justitio, quickly became the talk of the town. Who made him, how did he get on the pedestal and why did he disappear again after barely a week?

These questions can now be answered. Justitio's sudden disappearance is well documented: For employees of the City of Frankfurt and the Historical Museum recovered the wooden manikin a week after it appeared, so that it would find its rightful place in the museum. A video of the recovery can be found on the city's Instagram channel on the Internet. The clue to the unknown artist was finally provided by a newspaper article: Sachsenhausen artist Uwe Grodd was the creator, it said.

And indeed, in Grodd's apartment there are numerous miniature versions of Justitio. Unlike the latter, however, his little siblings are not loners: lined up in rows of eleven players each, representatives of the German national team, the Argentine selection and also an Eintracht team stand on wooden boards created especially for them: "I started making my first Q'es about 15 years ago. It soon became clear that this was not enough," says the 64-year-old artist, who studied at the renowned Saint Martin's School of Art in London and works at the Liebieghaus, among other places. In the meantime, he has produced well over 300 small wooden figures. The name Que is derived from the English word queue.

That his giant Que now goes by the name of Justitio and can be admired as the youngest exhibit in the History Museum since mid-June fills Uwe Grodd with pride. "I am happy for him. Of course, it fits the events like a glove. The message is clear: justice triumphs," says Grodd, alluding to Eintracht's cup victory as well as the fact that after just one week in public space, his guerrilla artwork is now in the museum to commemorate Frankfurt Eintracht's cup triumph.

But how did Grodd get the idea to place his wooden manikin on Römerberg as a stand-in for Justitia, who is currently in the depot for restoration? "The Fountain of Justice has been under renovation for months. It's the navel of tourist Frankfurt, photographed by everyone," says Grodd. Together with a friend, he first lobbied for the fountain's base, which is encased in a plywood mantle, to be given a QR code so that tourists would at least have the opportunity to view the Justice Fountain in its original appearance in a digital way. When Eintracht finally made it to the cup final, Grodd got to work designing his giant Q'e. "I thought it would go well together and we can put the figure up if Eintracht actually win".

In fact, Eintracht did win the trophy, and so Grodd stood on the Römerberg with a large ladder at 8 a.m. on Sunday, May 20. But the security staff did not let him to the fountain at first. Only after the intervention of an admissions officer who happened to be present was he allowed to place his statue on the pedestal of the Fountain of Justice. "I actually still wanted to screw it down, but decided against it so that it wouldn't get broken in case someone took it," Grodd reveals. The fact that his work of art is now in the museum is a good solution, he says. After all, who knows how long Justio would have braved the elements with his scales made of tuna cans without a permanent fixation. Despite the short stay, Grodd took great pleasure in his creative prank. He had looked at how people had reacted to his artwork several times, he said, and was extremely pleased with the response.

For those who would like to see more of Grodd's art, a visit to ExhibitionHall 1a, School Street 1a, is highly recommended. There, Grodd's Q'es will be on display alongside works by other artists from June 20 to 24, from 14 to 18 under the title "Collage and Co". For more info, visit <link http: www.ausstellungshalle.info _blank>

Grodd's Justitio can now be admired in the Historical Museum, Saalhof 1, just a few metres away from the Fountain of Justice on the Römerberg. There it stands on level 3, directly next to the Frankfurt model