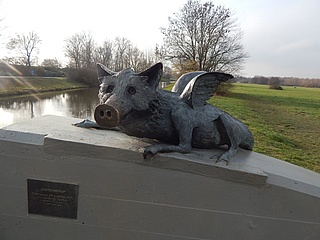 Yes, it's hard to stick to the hashtag #wirbleibenzuhause when the sun is shining. It's also hard to stick to the no contact rule. Yes, there's nothing wrong with going outdoors in beautiful spring weather. "Even the World Health Organization WHO recommends daily walks in the fresh air," says environmental officer Rosemarie Heilig. "Even jogging and cycling are still possible if you follow the distance rules." All well and good, BUT: you should now definitely resist the temptation to seek out the particularly highly frequented places in the city - especially the popular Mainufer.

Therefore, the city councillor appeals to Frankfurt residents not to flock to the Mainufer on sunny evenings and weekends. "Avoid any crowds. Please do not all make a pilgrimage to the Main. Rather, choose wisely a destination in the GrünGürtel!"

The GreenBelt offers 248 square kilometres of charming landscapes and paths where it is easy to avoid other walkers. In a series on the Facebook page "Frankfurt Green City", the environmental department has now already presented five of these "little escapes":

- the Fechenheimer Mainbogen with the newly created side arm of the Main.

All these destinations are also listed on the city website http://www.frankfurt.de under "GrünGürtel".

"We can be thankful that our parks - unlike in Paris or Rome - are still open," Heilig says. "In order to preserve this freedom of movement, I appeal to everyone to strictly observe the rules of contact, even in the GreenBelt."

According to the current legal situation, outings are only allowed alone, in pairs or with people from one's own household. When doing so, at least one and a half meters, better two meters distance to fellow humans must be kept

Further information can be found at https://frankfurt.en/topics/environment-and-green/places/green-guerrilla