Key handover for the MOMEM
from FFM Aktuell 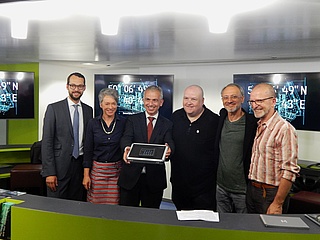 As early as 2011, Andreas "Talla 2XLC" Tomalla, who is considered one of the pioneers and most important trailblazers of the commercial German and international techno/trance scene, had the vision that it was imperative to do something in Frankfurt on the subject of electronic music. Together with the music producer and co-founder of the Technoclub, Alex Azary, and Stefan Weil from the agency Atelier Markgraph, he developed this idea into the concept of the Museum of Modern Electronic Music, or MOMEM for short. A concept that was enthusiastically received everywhere - both by politicians and the international press. Nevertheless, it was a long, difficult road until it was finally said: the MOMEM is coming! (We already told you more about it HERE)

The belief in this special museum and the perseverance of the initiators has paid off, because their dream can now finally be realized. On Thursday, they were handed the key for the former children's museum at the Hauptwache by Lord Mayor Peter Feldmann. While loud thunder set the rhythm outside, the first beats of electronic music sounded inside. However, that was the only thing that will connect the current premises with the future MOMEM. Because until the opening, which will take place in about a year, there will still be a lot going on, as Alex Azary announced when he handed over the keys. But what will visitors actually expect?

So much can already be said: the MOMEM will not become a classic museum. "It will rather be a walk-in sampler," Stefan Weil reveals. Starting from a core in the middle, different aspects of electronic music will be illuminated. There will be installations, retrospectives of various artists, interactive stations, film screenings, workshops, readings and much more on around 800sqm of exhibition space. Visitors will not only learn more about the history, the background and the many different types of electronic music. They can also get active themselves - both analogue and digital. The large glass façade also makes it possible to play the museum not only inside during opening hours, but also outside 24 hours a day all year round.

In the entrance area, visitors are welcomed by important representatives of electronic music - DJs as well as producers - in image and sound. In addition to the museum part with various exhibits, changing exhibitions and media presentations, as well as an area for events, courses and more, there will also be a store at MOMEM with a selection of books, DVDs, posters and merchandising, as well as various sound carriers - including special editions for collectors.

It will be a really exciting cultural venue for all ages, promises Andreas Tomalla, which will also be great for Frankfurt. Ina Hartwig, head of the department of culture, believes the same, who is delighted that MOMEM will set completely new accents in Frankfurt's museum landscape. We are also very excited and will of course keep you up to date.

You can find even more info at: