Kim Wilde comes to the Batschkapp in 2018
from FFM Aktuell 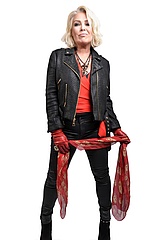 She was especially in the 1980s for many teenagers the dream of their sleepless nights: Kim Wilde! With her very special voice color and her blond lion's mane she advanced to the absolute "Princess of Pop" with hits like "Kids in America", "Chequered Love", "Cambodia", "You Keep Me Hangin' On" (#1 in the USA), "You Came", "Never Trust A Stranger", "Four Letter Word" and many more.

Meanwhile Kim Wilde can look back on more than 30 million sold albums, numerous Top 10 hits and awards. But for si no reason to retire. With a new album in her luggage, Kim Wilde and her live band will be coming to Germany, Austria and Switzerland from October 2018 for her "Here Come The Aliens" tour. She will thrill her fans with the long-awaited new songs from her eponymous new album "Here Come The Aliens" as well as all the hits that have made Kim Wilde one of the most successful artists of all time.

Everyone who has ever seen Kim Wilde live knows what a fantastic show she puts on for the audience with her great live band. After more than three decades in the business, the pop legend knows exactly what audiences expect from her. Kim Wilde loves to rock out together with her fans! The "Here Come The Aliens"-Tour is therefore an absolute must for all fans and lovers of the best pop music.

At the Brit Awards, Kim Wilde was named Best British Female Vocalist. She performed on Michael Jackson's gigantic "Bad" tour of Europe to over 2 million people in 5 months. She performed with David Bowie on his legendary Greatest Hits tour in 1990.

In recent years, Kim Wilde has toured regularly in Europe and Australia with her band, had a well-received career as a horticultural expert and continues her popular UK radio show on Magic FM in parallel.

's new album "Here Come The Aliens" will be released in the spring. Kim Wilde kicks off her world tour in the UK as early as March 2018, taking her to Scandinavia, Holland and also the USA later in the year. From 02 October 2018 Kim will rock Germany, Switzerland and Austria.