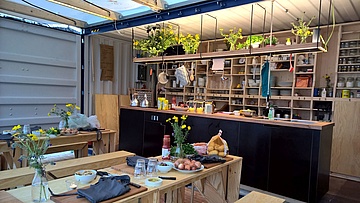 In the framework of the exhibition "Picnic Time" and in cooperation with the initiatives Kitchen On the Run and Über den Tellerrand Frankfurt e.V.

Even Confucius knew: "Whoever experiences the food culture of a foreign country gains a deep insight into the way of life of that people." Cooking together connects. Accompanying the exhibition "Picnic Time", the Museum Angewandte Kunst, together with the initiatives Kitchen On the Run and Über den Tellerrand Frankfurt e.V., invites you to intercultural cooking encounters that gather people from all over the world around one stove.

From May 6 to 21, 2017, and thus during the first two weeks of the exhibition, the kitchen container of the Kitchen On the Run initiative will be installed in the museum's Metzlerpark. It offers a place where refugees and those at home can meet at eye level during cooking evenings. Together with the team from Über den Tellerrand Frankfurt e.V., they prepare favorite dishes and become hosts of their food cultures. For this purpose, a shipping container was converted into a mobile kitchen, which already travelled through Europe in 2016 and will start its journey through Germany from Frankfurt in May 2017. Groups of 20 to 25 interested people will have the opportunity to participate in free culinary workshops in a convivial atmosphere.

The cooking encounters will take place Tuesdays to Thursdays from 5 p.m. in the kitchen container in Metzlerpark. For more information and to register, visit Www.kitchenontherun.org beginning May 4, 2017. Participation in the Night of the Museums cooking workshops on May 6, 2017 is without pre-registration. More information at www.museumangewandtekunst.de

The highlight of the culinary encounters around the Kitchen Container will be two large picnics in Metzlerpark: on Sunday, May 14, and for the festive farewell of Kitchen on the Run on Sunday, May 21, 2017, all interested parties are invited to join the joyful celebration with a blanket, their own food, games, or music, both starting at 1 pm. Public tours of the "Picnic Time" exhibit will take place at 3 p.m. both Sundays. No advance registration is required. Participation in the picnics is free of charge. Those wishing to take part in the guided tours pay the regular museum admission of 9 euros, reduced 4.50 euros (children and young people under 18 free).

The starting point for the intercultural project is the exhibition "Picnic Time", which is dedicated to the globally widespread phenomenon of dining in the great outdoors from 6 May to 17 September 2017. With the help of selected objects, photographs and installations, the exhibition tells of the wealth of variations of a popular cultural practice across different cultures and times. A varied supporting programme invites visitors to various thematic picnics in the park, lectures, discussions and film screenings throughout the exhibition's run from May to September.

Further information on the cooperation partners

Kitchen on the Run

The initiative aims to promote personal exchange between refugees and those who are at home, as they too rarely meet on their own in everyday life. It wants to enable people to get to know each other at eye level and thus contribute to the integration and acceptance of refugees in our society.

Jule Schröder, Dr. Rabea Haß and Andi Reinhard had the idea for the mobile kitchen container in January 2015, and winning the Advocate Europe competition made it possible to put the idea into practice. The shipping container was converted into a mobile kitchen by architecture students from TU Berlin together with refugees. The shipping container as a place of encounter conveys a drastic symbolism: while goods are shipped across all borders every day, it is not possible for many people fleeing war and persecution to move freely and legally across borders. In 2016, the container therefore travelled symbolically along a frequent flight route from the Italian Mediterranean to Sweden to draw attention to Europe's shared responsibility for the new arrivals. For four weeks each, the kitchen container made stops in the cities of Bari (Italy), Marseille (France), Duisburg (Germany), Deventer (Netherlands) and Gothenburg (Sweden). Every evening, 20 to 25 refugees and local people met to cook together. In the total of 80 events, 2,500 people of all ages from over 70 different nations met each other.

About the Edge of the Plate

Since 2013, About the Edge of the Plate has been using cooking as a door opener between cultures, bringing newcomers and those who are at home together at the kitchen table. Starting in Berlin, the innovative approach of "integration at eye level" is now manifesting itself across Germany with its diverse offering of cooking classes and cookbooks, street food stands, mentoring and encounter programs. In more than 30 German cities, people are already cooking outside the box.

Cooperation of both initiatives for "Picnic Time"

For the intercultural cooking encounters accompanying the exhibition "Picnic Time", Über den Tellerrand Frankfurt e.V. and Kitchen on the Run are joining forces: The kitchen container provides the venue and setting for the joint cooking evenings, while the team from Über den Tellerrand Frankfurt e.V. supports the cooking encounters and intercultural picnics during the exhibition period.