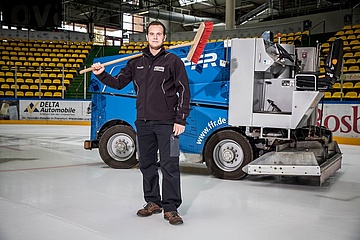 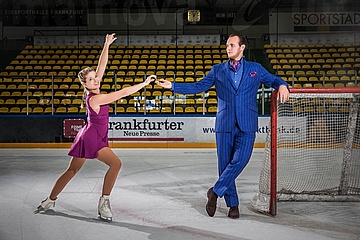 Nonchalantly and very elegantly Christoph Stade (27) leans against the ice hockey goal. Where usually only the goalkeeper of the Frankfurt Lions with all-round protection, helmet and gloves ward off the pucks, he shines in a blue tailored suit with light blue stripes. Matching his dark blue custom shirt with a light blue pattern and a fancy neckerchief by Frankfurt's well-known custom tailor Stephan Görner.

Also ice dancer Gloria Drebes is glad that Stade and his colleagues are here every day. The skating coach trains children and adults and has been skating herself since she was three years old. She benefits, as do all clubs of popular or professional sports and the skating public, from the fact that Stade maintains the four surfaces of the ice sports hall in Frankfurt ten times a day and makes the ice new.

The ice groomer for artificial ice has been employed by the Frankfurt Sports Office since 2013. Before his employment, the trained body builder was himself often to skate in the hall, has great fun to move on blades and therefore knows only too well how important it is to put on good ice. The professional ice hockey players of the Löwen Frankfurt also appreciate it when he maintains the surfaces with his large ice machine every hour and after every training session.

Twelve people of different professions were spectacularly staged at their workplace and in costume or tailor-made suit in 2016 and photographed by Nikita Kulikov. Every month a new motif of a different professional group is published and presented to the public. "We want to give recognition and appreciation to those who work in the "engine room" of the city of Frankfurt and ensure that the city is safe, clean and well-maintained," says Stephan Görner, idea creator of the Kleider machen Leute campaign.

Drebes and Stade were of course also guests at the charity gala Kleider machen Leute, on November 12 at the Hotel Kempinski in Gravenbruch, where all the motifs as well as the models were presented. Evren Gezer hosted the gala in aid of the Leberecht Foundation. 40,000 euros were raised for needy children and their families. Head of organization Sven Müller had been able to engage a great star guest with Paul Potts.

More info can be found at: Www.kleider-machen-leute.net