KLEIDER MACHEN LEUTE - The Lord of the Sausages
from FFM Aktuell 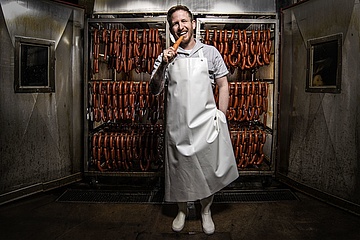 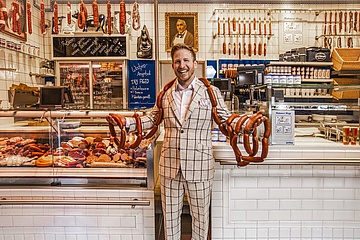 When you think of sausages in Frankfurt, you automatically think of the traditional company Gref-Völsing. The butcher's shop is one of Frankfurt's family-run businesses with a long tradition that has achieved absolute cult status not only among locals, but also among tourists from near and far. As early as 1894, Karl Gref and Wilhelmine Völsing founded the Gref-Völsing butcher's shop under both their names in the house "zum goldenen Kalb" in Schnurgasse in what was then the old town. 125 years later, Franziska Scarpello and her husband Mauro are already running the business in the fifth generation. Every day, 6500 of the much sought-after beef sausages, which Frankfurt simply cannot be imagined without, are produced. That is about 800 kilos of meat. 21 employees support the Scarpello couple in sales, production, at the snack bar grill or in the office, which has been based on Hanauer Landstraße since 1913.

The trained master butcher Mauro has been in the business since 2012. At 4.45 a.m. his alarm clock rings, then his long working day begins with the preliminary work. It is wolfed, cuttered, stuffed into casings and then smoked. When the shop opens at 7 o'clock in the morning, the hungry guests can be satisfied with fresh "Frankfurter", meat sausage or beef sausage, but also with all the other products of a good butcher's shop. The fact that Gref-Völsing's Frankfurter sausages are also known and sought after beyond the borders of the Rhine-Main area is shown by the fact that even the Frankfurt Economic Development Agency offers the delicious products to domestic and foreign guests at trade fairs in Cannes or Munich.

For the campaign "Clothes make the man", Mauro Scarpello slipped from his normal work clothes into a summery linen suit with a brown check pattern and a white polo shirt by tailor Stephan Görner. The "Clothes make the man" campaign has established itself in the Main metropolis and is already in its fifth year. Since 2015, people with extraordinary professions have been photographed annually in tailor-made suits by Daniel Baldus. Recognition, appreciation and respect for these women and men are the message that the initiators Stephan Görner and Sven Müller, thereby want to achieve.

On Saturday, November 2, 2019, these people with their new, chic costumes or suits will be presented to the 300 ball guests at the charity gala "Kleider machen Leute" at the Hotel Kempinski Gravenbruch. The event benefits the Leberecht Foundation. More than 120,000 euros have already been donated for needy children and their families. A varied programme awaits the ball guests. Tickets cost 250 euros. Included is a 3-course candlelight dinner, all drinks of the evening and the show program. The gala will be hosted by Evren Gezer.

All further info can also be found at: www.kleider-machen-leute.net