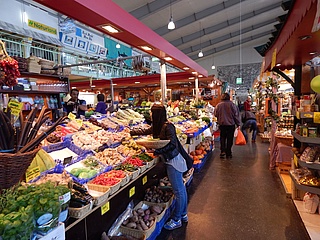 It is "A piece of Frankfurt with heart", attracts every day many locals, but also tourists. It is a popular meeting place and a place to linger and enjoy. But the Corona crisis has also hit the stall operators in the Kleinmarkthalle with full force. Although the sale of foodstuffs is allowed to continue. Gastronomic and snack offers, on the other hand, cannot, and there are plenty of them here. In addition, many customers are staying away from the city centre - and thus also from the Kleinmarkthalle - for fear of contagion. And so many businesses are struggling to survive as a large part of their income has been lost.

The HFM Managementgesellschaft für Hafen und Markt, as the municipal operating company of the Kleinmarkthalle, informed tenants at the beginning of the crisis how and where to apply for support from the federal government and the state of Hesse to bridge the economic difficulties. Furthermore, reference was made to a law passed by the German Bundestag at the end of March that protects tenants for a certain period of time against termination due to late payment. According to this law, rent payments and other payment obligations arising from the transfer of use from the period 1 April to 30 June 2020 can be paid until 30 June 2022. Under this provision, it is possible that interest on arrears may be charged under the Civil Code. No determination has been made at this time as to the amount of default interest, if any, that will be charged to tenants who are required to take advantage of this deferred payment option.

The interest, however, could result in a bankruptcy only being delayed, as it is likely to take a long time, even after the measures against the spread of the virus are lifted, for smaller businesses in particular to get back on their feet. If high interest rates then have to be paid, this already arduous path will be made even more difficult or even impossible. Therefore it was decided that here in each case examinations are to be made. As a result of a magistrate's resolution of the City of Frankfurt am Main of 3 April, a guideline framework is now available for this, which authorises HFM to waive the calculation of interest on arrears in part or in full until the end of 2020, taking into account the individual case and the affected party. The temporary serious payment difficulties in which the companies find themselves must be credibly asserted by them. HFM is preparing a corresponding supervisory board resolution to this effect.