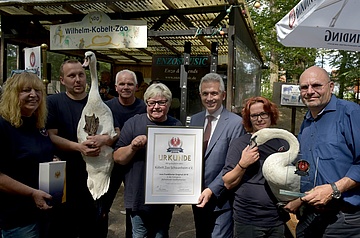 For many it is still an absolute insider tip, for others a popular destination during the summer months: the volunteer-run Kobelt Zoo in Frankfurt's Schwanheim district. We have already introduced you to the small zoo in more detail HERE. How much the Kobelt Zoo is close to the hearts of the people and how much the visitors appreciate the commitment of the staff, was clear in the election for "The Frankfurt Originals 2018": Here, the zoo supported by an association was clearly elected the winner in the category "Most popular district association". Now the Binding brewery, which runs the competition, has honored the winner with a winners' party at the Kobelt Zoo.

The Schwanheim gem is home to goats, ponies, raccoons, monkeys, reptiles, eagle owls and kangaroos. The donation-financed zoo is organized and supported by an association with about 10 active and 80 passive members, who all volunteer, care for the animals and look after the visitors and their physical well-being. And this work has now been honoured by the Binding brewery with a big winner's party.

Along for the occasion was Frankfurt's Lord Mayor Peter Feldmann, who also tapped the keg: "It's wonderful that we are celebrating a real 'Frankfurt original' in this little paradise just outside the city. The fact that the world of animals is brought closer to us here is thanks to the many volunteers. They make the Kobelt Zoo a unique place of recreation and that deserves respect."

"We are very pleased that with the Kobelt Zoo we can celebrate the winner of the competition 'Die Frankfurter Originale 2018' as the best district association and thus honor the great work of the many helpers," said Otto Völker, CEO of Binding Brewery. "When we started the campaign in 2016, we had no idea how much the people of Frankfurt would go out of their way to vote for their favourites. For us as a traditional brewery, it is a nice sign of regional solidarity that we can celebrate winners like the Kobelt Zoo."

Also Frankfurt-Tipp.de once again congratulates the Kobelt Zoo on winning the title of "Most Popular District Club" - a true Frankfurt original!