Kobelt-Zoo remains closed for the time being
from FFM Aktuell 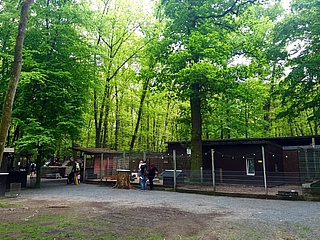 Actually, on 01. May this year's season at the volunteer-run Kobelt Zoo in Schwanheim began. But again this year the Corona pandemic has put a spanner in the works. Although the small zoo would have been allowed to open - but only under strict conditions. Last year the Kobelt Zoo was allowed to open at the end of May. At that time, it was only open on Sundays for a maximum of 50 people at a time on a designated circular route. Although this worked well, it was an enormous challenge for the staff. The now stricter requirements make it impossible to open the zoo.

Because in addition to the public restriction, the proof of a negative coronation test required to visit the zoo, the mask requirement and the booking of appointments at certain time windows would also have to be controlled. And that is impossible for a zoo run on a voluntary basis. Group appointments for school classes and kindergarten groups also cannot be offered again at this time. However, as the zoo writes on its Facebook page, there is still hope that later this season, which runs until the end of September, can still be opened under less strict conditions.

With the ongoing closure of the zoo, which was founded more than 100 years ago in honor of naturalist Dr. Wilhelm Kobelt, who died in 1916, donations that are normally given by visitors at the exit and on which the Kobelt Zoo is absolutely dependent will of course also be lost. Who would like to support the voluntary work of the zoo especially in this difficult time, but can still do so:

The Kobelt Zoo team is very grateful for any support!