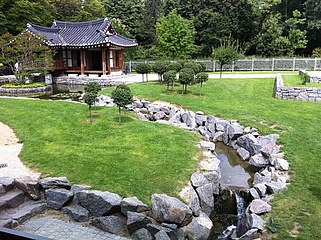 (kus) Many Frankfurt residents' hearts bled when the Morning Dew Pavilion in the Korean Garden burned down in the spring. Especially the Korean community is very attached to the place, as the garden is a gift from South Korea on the occasion of the book fair 2005. With a choir concert, the head of the environment department Rosemarie Heilig and the Korean consul general Prof. Dr. Bumhym Bek now start a joint project. Bumhym Bek are now launching a joint fundraising campaign for the reconstruction.

As part of the summer series "The Wild Sunday", the Harmonie Ensemble will give a guest performance in the Korean Garden on Sunday, July 30, at 3 pm. The choir of nine singers - mostly former and current Korean nurses - is returning from a major tour of South Korea just in time for the concert.

Under the direction of Young-Shik Kim, the singers will present an intercultural program in traditional costumes. The repertoire ranges from Korean classical music to contemporary pop, from operetta and musical to Italian canzoni.

The Korean Garden is located in Grüneburg Park, an extension of August-Siebert-Strasse. Admission to the concert is free, and registration is not required. Access is barrier-free, but there is no seating and guests are asked to bring sunscreen or umbrellas if needed.

How to get there: Take the U 6 or 7 to Westend station or bus line 36 to Mitscherlichplatz. More information can be found at <link http: www.frankfurt-greencity.de _blank>