Kunstverein EBENE 1 - Art in an unusual place
from FFM Aktuell 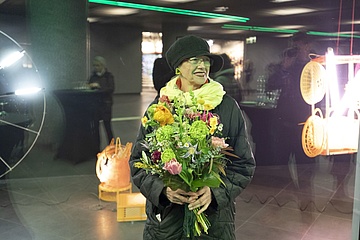 Art has long since not been the preserve of museums. Works of art or installations can also increasingly be observed in public spaces. The young art association EBENE B1 Taunusanlage has also made it its business to bring contemporary art into public space. An unusual location was chosen for this: the Taunusanlage S-Bahn station. Here, for example, installations were already on display during the last Luminale. Now a new exhibition has been opened at the S-Bahn station: KASACHSTAN by the Frankfurt artist Heide Weidele. On Tuesday, March 26, the artist was honored in the context of her exhibition on the occasion of her 75th birthday. Peter Wöste, first chairman of the Kunstverein, welcomed the numerous friends of the artist and cultural figures from Frankfurt. The laudatory speech was given by David Dilmaghani, the office manager of the Department of Culture and Science.

"In a place like the B-level of Frankfurt's Taunusanlage S-Bahn station, hardly anyone would suspect contemporary art. On her 75th birthday, Heide Weidele surprises us once again in this unusual place with her ever new innovative creations, whose charm lies in the combination of sculptural stringency with ironic wit and cheerful exaggeratedness," said Ina Hartwig, head of the department of culture, congratulating the Frankfurt artist on her birthday.

Weidele has lived in Frankfurt since 1971. The former bookseller studied at the Hochschule für Gestaltung in Offenbach and at the Städelschule. In addition to various teaching assignments, she was a visiting professor at the Johannes Gutenberg University in Mainz. Her works are known from numerous solo and group exhibitions at home and abroad.

With her current exhibition KASAKHSTAN, Heide Weidele presents a new series of works of light sculptures. The Frankfurt-based artist is known for her spatial objects made of plastic found objects. The materials, which often originate from her earlier installations, are constantly reused. For KASAKHSTAN, Weidele was guided by associations she makes with the country she has never visited herself: "Steppe country, sparsely populated, poor country with the largest space station on earth, Baikonur."

In the works, the appeal lies in the interplay of technoid sculptures with ironic wit and a colorful exuberance. While in the past it was mainly the material, everyday objects made of plastic, that formed the inner context of her works, the artist is breaking new ground with the current exhibition. Here, for the first time, a thematic context is the focus of her works: KAZAKHSTAN, barren steppes and high-tech space station at the same time.

The Kunstverein's spaces are located in the two access buildings of the Taunusanlage S-Bahn station and are open 24 hours a day, admission is free.