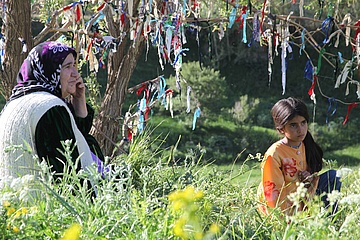 (kus) In cooperation with "JXK- Students Women from Kurdistan" and "Amara - Kurdish Women's Council Frankfurt", Filmforum Höchst is once again presenting the "Kurdish Film Week" after a two-year break, offering insights into filmmaking in the Kurdish regions of Turkey and Iraq from Thursday, October 13 to Wednesday, October 19.

In addition to feature films such as WERE DENG&Ecirc; MIN - FOLGE MEINER STIMME by Hüseyin Karabey or KLAMA DAYIKA MIN - SONG OF MY MOTHER by Erol Mintas, the programme also includes documentaries such as SARA - JIYANA MIN HER ŞER B&Ucirc; - MY WHOLE LIFE WAS A FIGHT by Dersim Zerevan. In addition, the German premiere will be Bernard Henri L&eacute;vy's film PESHMERGA, presented in Cannes, about the Kurdish units fighting against the so-called Islamic State.

Both the feature films and the documentaries focus on Kurdish women.

A village in Turkish Kurdistan. The protagonists are under police pressure. Right at the beginning, a parallel montage tells of this: while in the house grandmother Berfe is putting her granddaughter to bed with a tale of the fox who lost his tail, outside in the darkness a military caravan drives up from which armed soldiers swarm into the village. The soldiers take Berfe's son Temo and other men, under the pretext that he has hidden weapons. The prisoners would not be released until these were handed in. There are no real weapons in the house. Berfe and her granddaughter Jiyan, set out to find weapons somewhere to hand them in.

A young teacher Ali lives with his aging mother Nigar in Istanbul's Tarlabası district, home to many Kurdish refugees since the 1990s. When they are forced to move on again by the ongoing gentrification of the old city, they end up in the soulless concrete wastelands of the suburbs. Nigar is convinced that her former neighbors have all gone back to their Kurdish villages. Every morning she packs her things and sets off for her old village. She roams the city in search of the village and in search of the one song that constantly recurs in her dreams. All Ali can do is care for her.

N After the fall of Saddam Hussein in Iraq, Kurdish childhood friends Hussein and Alan decide to make a film about the Anfal operations, the Iraqi regime's mass murder of the Kurdish population in northern Iraq. But filmmaking in post-war Kurdistan is no easy game, and finding the female lead seems to be the most difficult task. But then Sinur suddenly appears: young, beautiful and enthusiastic about the project. But Sinur can't decide alone: her cousin Hiwar and his father, Uncle Hamid, hold her fate in their hands. Problems mount, they run out of money, but Hussein and Alan sacrifice everything to keep filming. But then, in a tragic moment, Hussein is shot while filming the final scene. Will the film ever make it to the big screen?

In BAKUR, directors &Ccedil;ayan Demirel and Ertugrul Mavioglu offer an inside view of the PKK. In doing so, the documentary reflects on issues such as the question of independence, freedom, self-determination as well as the position of women.

Documentary about the life of Sakine Cansiz (SARA), founding member of the PKK, who was assassinated with two other women in Paris in 2013. She is one of the most important symbol and identification figures for the Kurdish movement, especially for Kurdish women. The film tells her story in chronological order.

From July to August, Bernard - Henri L&eacute;vy traveled with a film crew along the 1000-kilometer front line that runs between Iraqi Kurdistan and the forces of the so-called Islamic State. The result is a cinematic diary with images of a war that affects the whole world. Very close to the Kurdish fighters, the film documents the unconditional determination of the Kurds to fight obscurantism and jihadism without compromise. The film takes us to the heights of Mosul and the Sinjar Mountains, much of which was liberated in November 2015 by pushing back IS.