Land under the Green Sauce Fields
from FFM Aktuell 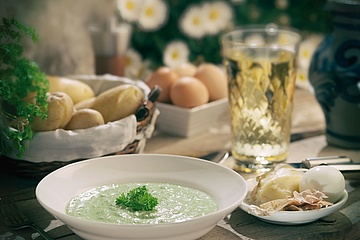 The persistent rain is not only depressing the mood of many, the farmers especially in Oberrad he is currently causing real concern. There, where the seven herbs for the popular green sauce are grown, water and mud dominate at the moment. Herbs that have already been sown, such as chives and chervil, are downright waterlogged, and for those that are to be sown at the beginning of March at the latest, the soil could not be prepared according to the current state of affairs. The rain is only one of the problems with which not only the Frankfurt farms are confronted. The fact that there has been no frost this winter (so far) is particularly unfavourable. As a result, many pests have not been killed off and mulching, which is necessary to enrich the soil with more nutrients, is also extremely difficult to impossible.

There is still hope, though, that in the end everything won't turn out quite as bad as it looks right now. At least then, if the continuous rain stops now once in the long term. But it is clear that there will be bottlenecks with the original Frankfurt Green Sauce this year. The demand is particularly high at Easter - and it will hardly be possible to cover this demand with local herbs. Of course, there is the possibility of importing herbs from other countries. But then, of course, this also affects the price - and is also not an original Frankfurt Green Sauce.

It now remains to hope that the farmers can free their fields and greenhouses again from water and mud and subsequently also from weeds and pests to the extent that they can plant enough herbs so that your existence is not threatened. Because even if it is a pity for the consumer, of course, if sometimes a little less Grie Sooß can be consumed - for the farmers, of course, the damage is much greater in the long run. We keep our fingers crossed that the worst is over now and that there won't be any more rain!