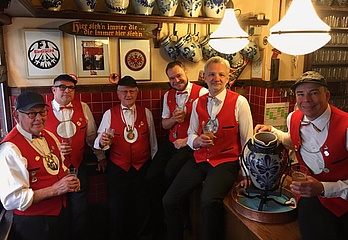 Punctually at 11.11 a.m. on Monday, February 6, a few of Frankfurt's best-known cider innkeepers gathered at the Adolf Wagner cider inn. They are all members of the Elferrat of Frankfurt's traditional carnival club Laternche. Together, the innkeepers and the Elferräte of butchers, bakers and confectioners and head craftsmen are celebrating a big anniversary this session: 50 years of Ebbelwei sessions.

An achievement of which all are equally proud - even if only Hans Emmert of those present has experienced the session from session number one. "The Ebbelwei sessions brought the hosts together," he recalls. "In the old days, there was no exchange whatsoever between the innkeepers. If you came across each other on the street, sometimes the street side was changed." After the founding of the 1st Elferrat then even the really "hard Knoche" have become soft. "We then drank Bruderschaft - that would have been unthinkable before," says the 81-year-old. For the first Ebbelwei sessions of the Laternche at the Volksbildungsheim, all the hosts brought a few crates of their home-pressed cider - and their customers from the business community.

The carnival sessions of the club are among the most popular in the whole Rhine-Main area. So it's no wonder that all 550 seats in the Saalbau Titusforum are sold out again this year at each of the total of seven Ebbelwei sessions. When designing the programme, the members of the Carneval Club, which was founded 67 years ago, rely on what they "do best": making the audience laugh. No gags are bought in or recycled from other events. Every year, the club members put together a completely new program that can only be seen exclusively at the Ebbelwei meetings. The new session president Thorsten Wszolek pays very close attention to this. "Where Laternche druffsteht, is also Laternche in it". Wszolek has been on stage for many years. His passion is the Hessian dialect: paired with Fastnacht of course a dream combination. In the lectures of the Ebbelwei sessions politics, society, humour, dullness, satire and Kokolores are merged to a versatile, entertaining and unique programme. Only the Laternche Choir and the Laternche Dancers are brought in externally by the club for support.

The Laternche attach particular importance to Frankfurt traditions - but not to traditions that are particularly important to other carnival clubs, such as designing a float for the big carnival parade or medal ceremonies: "I do this for the audience, not for brass!". Often those with the most pompous medals are also the biggest assholes", says Thorsten Wszolek. At the big parade through Frankfurt's city center, the Laternche are now for the second time not included. "We prefer to focus on what we are particularly good at and that is the Saalfastnacht," he explains.

These are the dates of the Ebbelweisitzungen 2017