Leipziger Straße is an excellent shopping street
from FFM Aktuell 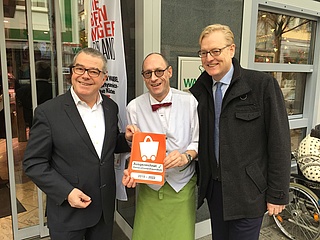 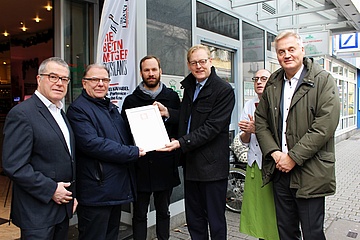 Great joy among merchants and tradespeople on Leipziger Straße as well as at the Bockenheim Aktiv trade association: the Hessen trade association has awarded the shopping street in Bockenheim the &sbquo;Generation-friendly Shopping' quality seal. "This seal of quality makes us proud, of course," says Holger Wessendorf, chairman of the trade association. "This is a real appreciation and that we of course also recognized by the customers." Therefore, the quality mark is very good for a street like Leipziger.

After Schweizer Straße was awarded the first certified shopping street in 2017, Leipziger Straße is now the second. The fact that this is also located in Frankfurt is particularly pleasing to Markus Frank, head of the city's Department of Trade and Commerce, who together with Joachim Stoll, Chairman of the Frankfurt Trade Association, officially presented the quality mark to Holger Wessendorf in a celebratory round. The location chosen for the award ceremony was the Waibl butcher's shop, which was named one of the best butcher's shops in Germany. Kai Waibl is one of the tradesmen who are enormously committed to their street and to whom the quality mark is owed.

Frank underlined the significance of the award: "In times of demographic change and digitalisation encompassing all sectors, the retail trade is faced with the challenge of sustainably meeting changing customer demands in the future. We were very happy to help Leipziger Strasse achieve this mark of quality. Making everyday shopping as convenient and barrier-free as possible for all customers is exemplary pioneering work for the livable and lovable shopping home of Leipziger Straße," the city council praises the joint initiative.

At the same time, "generation-friendly shopping" is not exclusively aimed at old people, but also at families with prams, at people whose mobility is restricted - and simply at everyone who likes to go shopping here. 80% of the shops on Leipziger Straße meet the requirements for generation-friendly shopping. Among them are a great many family-run businesses, but also large retailers, such as the Zalando outlet. Of course it is a pity when small, individual shops like the "Pappnase" close, says Wessendorf. Because they give the street its special character. But also large providers such as Zalando are very good, because they bring people to the Leipziger, who otherwise would not come and who thus discover the street for themselves.

Joachim Stoll emphasized in his speech the importance of the quality mark in the course of the demographic change and especially the high service thought of the merchants: "Through a pronounced service thought and individual help, structural disadvantages of a historically grown inner-city quarter can be compensated."

Since spring 2010, the "Generation-friendly Shopping" quality mark has been awarded to retail stores throughout Germany that meet uniform nationwide criteria in terms of the range of services offered, accessibility, store equipment and service. Following the nationwide launch of the "Generation-Friendly Shopping" quality mark in 2010, there are now a total of 10,389 retailers (including shopping centers and city districts) that have received awards for their generation-friendliness. The quality mark was developed jointly by the German Retail Association (Handelsverband Deutschland, HDE), its regional associations and the "Wirtschaftsfaktor Alter" initiative.

We warmly congratulate all those responsible on this well-deserved seal of quality!