Let the nagging begin - The Frankfurt Christmas Tree is here!
from FFM Aktuell 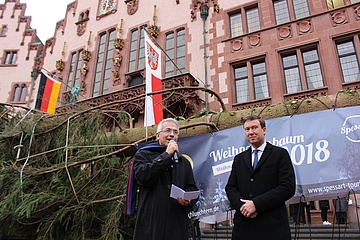 It has become a real event that attracts more and more people year after year: The arrival of Frankfurt's Christmas tree on Römerberg. Everyone wants to be there when the tree is put up and everyone wants to be the first to let out his "we never had such an ugly one before" or a "a tree had to die for such a thing" - knowing full well that these cherished grumblings will fall silent at the latest when the tree is lit up for the opening of the Christmas market.

This year, the tree was truly welcomed with bangs and trumpets. From Schlüchtern in the Spessart region, where the spruce comes from, a whole delegation had travelled to celebrate the arrival of their tree. At the end of October, the spruce had been selected by a group of journalists and local politicians and has now arrived in Frankfurt by low loader on Thursday, 1 November, and has been erected by the fire brigade.

"The selection of the tree was not only about beauty, but also about ecological aspects: It comes from the region and therefore has a short journey, in addition, 50 new trees are planted in the context of a reforestation", said Lord Mayor Peter Feldmann - also in the hope to take the wind out of the sails of some critics. The head of the city observed the planting action at the Römer together with Schlüchtern's mayor Matthias Möller and Susanne Simmler, district councillor of the Main-Kinzig district.

Naturally, the transport has not passed completely without a trace on the tree. And that's why the spruce is getting a little beauty treatment before the Christmas market begins. The lower branches are shortened to make room for the stage under the tree. Branches are added here and there, then comes the decoration: around 4500 lights and over 300 red bows. And then: ". the Christmas tree will be the landmark of our city for a good four weeks - and certainly the most photographed Frankfurt again," Feldmann is sure.

And he should not be wrong with this assumption this year either: for years, the Frankfurt Christmas tree has been Germany's largest uncovered Christmas tree and thus a real crowd puller. It magnetically attracts photo lenses and mobile phone cameras! But the tree from Schlüchtern is also imposing. It weighs 6.2 tonnes, is 31 metres high and around 80 years old.

The Christmas tree in front of the Römer is the annual landmark of Frankfurt's Christmas market, whose tradition dates back to the 14th century. Until 1968, the Römerberg was decorated at Christmas time quite traditionally with many small trees, in front of the town hall they put up a slightly taller tree. The trend towards the giant Christmas tree began in 1968, when Norwegian banks came up with the idea of giving Frankfurt, Germany's most important financial centre, a symbol with appropriate symbolism to put the city on an equal footing with other financial metropolises. This tradition continues to this day. In most cases, the tree is donated by a municipality or city. Spessart Tourism and Marketing applied last year to provide the Christmas tree for this year.