Life is coming to the DomRömer area
from FFM Aktuell 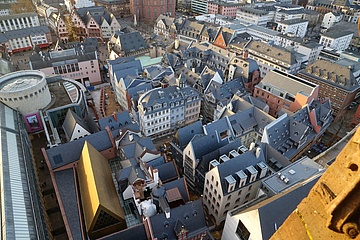 Four years of construction and now the end is in sight: Frankfurt's DomRömer quarter is almost complete. Soon the area with the replica of the old town destroyed in World War II with 15 reconstructions close to the original and 20 new buildings will be open to the public. The new owners of the 75 apartments and 30 commercial spaces, who will be handed over their new premises between mid-April and mid-May, will be particularly pleased about this. This will bring life to the quarter, which will be opened in September with a big celebration. Until then, three museums, Caf&eacute;s, restaurants and shops will be built on the approximately 7000 square meter area on the site of the former Technical City Hall, in addition to the already completed apartments.

Following the development of the commercial areas, the DomRömer site will be officially inaugurated in September 2018 with a large citizens' festival. The demand and the interest of the citizens in the new old town quarter are particularly high. At a joint ideas and planning workshop, they contributed their suggestions for the design right at the start of the project. "We are happy to have restored a piece of the historic face of Frankfurt, which used to be Germany's largest medieval old town. In Drees & Sommer, we had a competent partner on hand to implement the highly complex project within the planned budget and timeframe," says Michael Guntersdorf, Managing Director of DomRömer GmbH.

Selected historic façade parts that survived the events of the war and could now be incorporated into the façades of the 35 old town houses ensure a particularly authentic image. Further historical finds of the Main metropolis are on display in the Archaeological Garden in the Stadthaus am Markt, which closes off the quarter to the south