Lights on: Christmas atmosphere on the Zeil
from FFM Aktuell 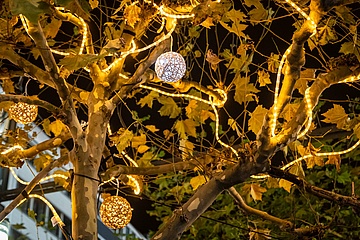 Christmas lights are now enchanting our city centres again. Let's be honest: Frankfurt hasn't quite been able to keep up with other cities in recent years. And also in 2021 the illumination is rather spartan, but at least it is a bit more festive than last year. "We let our Zeil shine winterly and send from Frankfurt a strong light into the world", with these words Lord Mayor Peter Feldmann and Head of the Department of Economic Affairs Stephanie Wüst illuminated this year's Christmas lights on the Zeil.

The lighting, which was acquired last year by the Neue Zeil trade association as well as the municipal city and district marketing and business development, was expanded this year by quite a few elements. In addition to the LED lights, another 400 golden and snow-white Organic Balls now adorn the treetops of the Zeil plane trees. For Lord Mayor Feldmann, the campaign confirms the credo of Frankfurt's public spirit: "Only together can such projects become reality". This year's illumination was once again realized by City and District Marketing and Economic Development.

Frankfurt's inner city is equally significant for business people and citizens. The lighting last year received a broad positive response, especially against the backdrop of the pandemic and deserted city centres. The promise of the actors was kept and this approach is to be continued. Festive lighting is as much a part of Advent as mulled wine, cookies and Santa Claus. It creates anticipation, a positive mood and optimism - and this is precisely what the stakeholders currently want to achieve.

"The Christmas lighting is a clear signal for the traders in the city centre. Advent is one of the strongest sales periods of the year for retailers. The stationary trade and the local gastronomy are enormously important for our city centre and I am therefore pleased that the realisation of the illumination by the business development and the city and district marketing together with the trade association Neue Zeil has worked out and that we can start the Advent season full of atmosphere", emphasises head of the economic department Wüst. "Numerous trade associations have also shown their support for the Christmas lighting in the city districts. Many shopping streets will welcome their customers with atmospheric displays in the run-up to Christmas," stresses Councillor Wüst, pointing out that various additional activities are planned in the city centre as well as in the districts to create an atmospheric ambience. All these activities in the districts will also be communicated in a special supplement in the local media.

With the already Monday, 22. November, and the now illuminated Zeil, festive Advent spirit returns to Frankfurt's city centre, making the upcoming Advent stroll as well as Christmas shopping once again a very special experience for the whole family. In this context, the head of the city appeals to prudence and attentiveness of each individual in view of daily rising infection figures.