Lions Frankfurt are celebrated on the Römerberg
from FFM Aktuell 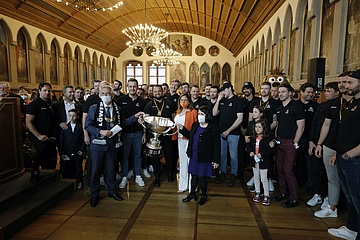 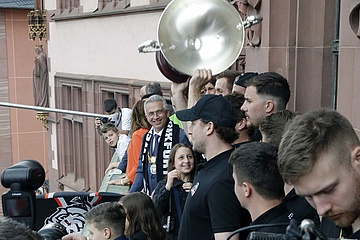 Frankfurt currently has much to celebrate in sporting terms. After the grandiose performance of Eintracht in Barcelona, it was on Friday, April 22, the Lions Frankfurt , which caused frenetic jubilation among the fans when they were able to prevail in the top match against Ravensburg with 1:2. Thus, the team made the sensation perfect and won the championship title in the second ice hockey league. This also solved the hotly longed ticket for promotion.

This sporting feat was now honored by the city of Frankfurt - and subsequently by the fans. On Wednesday, April 27, Lord Mayor Peter Feldmann invited the team and its makers to the Römer. The program included a ceremony in the Kaisersaal, including an entry in the Golden Book of the city, a banquet in the Römerhallen and - most importantly - the championship party.

"Well roared, lions," Feldmann congratulated the newly promoted. "That was simply masterful. World champions and cup winners have already stood on the Römer balcony. Now it is your territory - and the Römerberg is firmly in the hands of the Löwen fans. Frankfurt is proud of you. Because this success didn't come overnight. You have worked hard for it, and on your way you have ignited an enthusiasm for ice hockey that can be felt in every corner of this city. The DEL can only gain from such a team."

"The Löwen Frankfurt have rewarded themselves and all of Frankfurt with the championship after a great season," said Sports Director Mike Josef. "Therefore, my heartfelt congratulations on the DEL 2 championship title go to the team, those responsible and also to all the fans. The team has given us a lot of pleasure in terms of play throughout the season. And who then still plays through such a play-off series without a single defeat, it has simply more than earned to call themselves champions."

The approximately 1,000 fans on the Römerberg saw it the same way. They let their team hochleben and provided an atmosphere in front of the Römer, as it has not been experienced for a long time. On Friday, April 29, the celebrations will continue: The lions invite to the championship celebration in the Batschkapp. Read more HERE