Lisbet Windsor invites to the ball
from FFM Aktuell 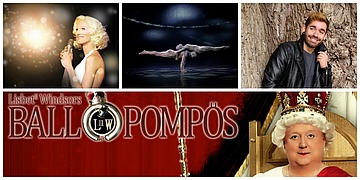 On 30.04.2017 a glittering ball night will be celebrated at the Westin Grand Hotel Frankfurt. To dance into May here Lisbet Windsor's Ball Pompös will take place, a tribute to the so-called "fag balls", which are celebrated especially in Berlin of the 1920s and 30s. While these were rather events of a subculture, the dazzling costume ball in Frankfurt is supposed to be a ball for all citizens of the city. For this reason, not only does the Queen of the City extend a personal invitation, she has also ensured that ticket prices are comparatively affordable. So there is the strolling ticket already for 65 &euro;, VIP tickets with a fixed seat in the ballroom for 125 &euro;. Strolling tickets include access to all rooms and the show in the Grand Seven as well as the popular Westin Grand finger food buffet, VIP tickets include show program and top buffet. The emcee in the ballroom will be Queen Lisbet Winsor II herself, with her colleague Marlene Deluxe setting the tone in the lower level. Gabriel Groh and his band Groove Connect are responsible for the musical direction of the evening. For 10 years now Groh has been working together with Lisbet aka Bäppi La Belle, so it was a matter of course that he will also be part of this very special ball night.

Bäppi aka Thomas Bäppler-Wolf is of course a pro when it comes to organizing big balls. For 38 years he has been able to gain experience with his dance school and hosting ball events, which is now paying off. For him, two things were particularly important: on the one hand, the location must be right and, on the other hand, a varied programme must be offered that offers something for every taste. The Westin Grand Hotel was chosen as the perfect venue in many respects. The hotel does not only have the premises, but also the experience with such events. In addition, the transport connections are perfect. Guests can really party hard and then either take public transport from the nearby Konstablerwache, or take one of the taxis waiting right outside the hotel to get home. And if you'd rather rest your feet or sleep off the buzz, you can also book a room at the hotel at special rates.

And Bäppler-Wolf has also made a point of offering its guests only the best when it comes to the program. Pop, rock, classical music, disco and show - there is something for everyone. Among the star guests of the ball are Daniel Küblböck, who already calls Bäppis Theatrallalla his second living room, the celebrated chamber singer Karin Pagmardie Rock`n`Roll Formation Transformation, travesty artist Eva Longgloria, the Mamma Mia Dance Show, as well as La Vision, who have already performed at the world-famous Cirque du Soleil and won second place at the "Supertalent". In addition, the sisters of Perpetual Indulgence are on the road to collect for the good cause in their very special way and Tarabas van Luk will not only ensure with his voice, but also with his appearance that the guests will not forget his performance so quickly.

Other than that, there is a lot of fun and socializing on the agenda this evening. There are no limits to the imagination when it comes to costumes. Who would like, can also participate in a travesty contest. The winner gets the chance to perform their own show at Theatrallalla for one evening and keep the proceeds from that evening as prize money.

The patronage for this ball night has been taken over by Frankfurt's new head of culture Ina Hartwig.

All further info about the ball, the program and the tickets can be found at: <link http: www.ball-pompoes.de _blank>