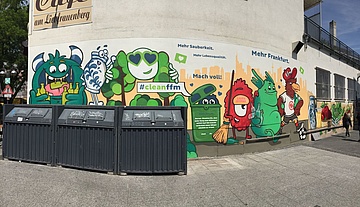 More cleanliness - more quality of life - more Frankfurt! That's the motto of a graffiti on the Kleinmarkthalle as part of the #cleanFFM campaign the city has been using for some time to promote a cleaner Frankfurt. But after some small progress, the garbage problem is now not only unsightly, but downright annoying proportions, under which the cityscape, but also many citizens have to suffer. One reason for this are the Corona requirements.

Because what do the often (but not only) young people do when the temperatures rise, they are allowed to meet again, but clubs remain closed and bars can be visited only limited? They meet in public places to party there. Because it is so nice at the Opernplatz, at the Mainufer or at the Friedbergerplatz. The grotesque thing is that it is precisely these people who ensure that such places lose their attractiveness, since only a minimal fraction of those who party there also take care of the disposal of the rubbish they produce. But illegally disposed bulky waste has also been causing more trouble in the city for some months now. This is certainly not only since Corona a problem - but the pandemic has intensified this, which has in some places in Frankfurt on some days really unpleasant consequences.

"The complaints are piling up in recent months - and we are required as a city to do something," says Mayor Peter Feldmann. Thus, in the station district, the garbage on the streets has become rampant, bulky waste is piling up, at the Opernplatz and other hotspots, partying people leave behind large piles of garbage. "The responsible staff office, the public order office, the police and many other parties involved must pursue such pollution harder, finally cooperate better," said Feldmann about just one example of many.

The responsible department heads Rosemarie Heilig (Stabsstelle Sauberkeit) and Markus Frank (city police) presented quite a few new measures to counteract the growing mountains of garbage. For example, as of July 1, higher fines will apply, which may also be collected on the spot. Feldmann said: "We also need such repressive measures, but above all we need ideas that are sustainable in the long term."

"Before the Corona pandemic began, I had seen us on a good path to keeping our city clean in a sustainable way. Our Clean Frankfurt staff, the #cleanffm campaign, and FES had been successful with their work. Then came Corona. Since then, the city has been littered like never before, even though FES has been working to the bone for months. We are reaching our limits with our commitment. That's why I welcome the support of the Ordnungsdezernent Frank," said Environment Director Heilig.

"We are turning the individual adjusting screws, from increasing the fine to additional plainclothes city police officers, to respond to the current situation. But there needs to be a sustained change in awareness. Socializing is nice and important, and after the corona-induced lockdown, eagerly anticipated by all. But wild pissing, littering squares and green spaces do not contribute to the well-being in social community," said Councillor Markus Frank, who sees a connection between the current deplorable state of affairs in public squares and green spaces and the elimination of other recreational pleasures such as going to concerts and cinemas, club nights and football matches due to infection control reasons.

One would now like to think that it is enough to appeal to common sense and good childhood manners so that everyone takes away the rubbish they create or at least disposes of it properly. But unfortunately, the city is falling on deaf ears with this. And that is why not only higher fines are now due. Feldmann has also hired the high-profile cleanliness consultant Peter Postleb. Postleb, who has since retired, was already head of the Clean Frankfurt staff unit from 2001 to 2013, introduced a catalogue of fines, among other things, and was a proponent of closer cooperation between the city police, the state police, the staff unit, the FES, and other players such as Deutsche Bahn. Postleb proposes some immediate measures, such as regulatory action days with the city police at the after-work scene in the city centre and at central squares in the other parts of the city. "In addition, sufficient litter receptacles will be placed temporarily in the major plazas and along the banks of Main," Postleb said. "We will also start directly with quite a few smaller measures."

It remains to be seen whether these measures also help. Action must be taken in any case, because that Frankfurt sinks in the garbage, that can really nobody want.