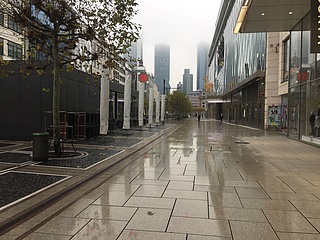 Nobody probably expected any loosening or big surprises. Nevertheless, the results of yesterday's federal-state conference are not good news for many: the Corona regulations will be extended until March 7 for the time being. Today, the Hessian state government also discussed the results in a cabinet meeting and passed corresponding resolutions for our state. For Minister President Volker Bouffier, what has been achieved so far is a success that should not be risked lightly. Therefore, the time for comprehensive easing is simply not there yet. But, Bouffier said, there was also positive news:

"I am pleased that we have an opening perspective for schools and Kitas: Beginning Feb. 22, grades 1 to 6 will be taught in alternate years. The day care for children will be temporally opened again in regular operation under pandemic conditions for all children - but with limited care times. Thus, we keep our word: In Hesse, we will start with the schools and daycare centers in the first opening step, because we must not leave children behind in education," said the Prime Minister.

As already the Chancellor, Bouffier also emphasized once again that due to the virus mutations increased caution is appropriate, so that we do not immediately slip into the next wave - and thus into an even longer lockdown: "Therefore, we have agreed with the federal government to target the incidence of 35 mentioned in the Federal Infection Protection Act as a further target point for the relaxation of protective measures. At a minimum, however, we need to get well below 50. That's the only way we can ensure contact tracing and break infection chains." Bouffier stressed that vaccinations continue to be an important component in coping with the pandemic. "Hesse is consistently pursuing this path. What we get in vaccine, we vaccinate. As of last night, we have already carried out 175,219 first vaccinations and 71,954 second vaccinations. The rate for residents of old people's homes and nursing homes is over 72 percent. It goes forward," stressed Bouffier.

New: masks are also mandatory in elementary schools as of 2/22. These do not have to be medical masks, but they are recommended

"We are ending the appeal to keep children at home whenever possible, effective Feb. 22. It is important and necessary that all children have access to day care again. The youngest children in particular, who have been cared for at home in recent weeks, urgently need a return to childcare provision. For parents, the signal is to open up and loosen up as carefully as possible. This also includes that the care offers will mostly be limited in time," said Health and Social Minister Kai Klose, "because the recommendation to care in constant groups remains."

With the opening step for schools and daycare centers, the test offer for school staff and educators will also be further increased. The offer of free testing every two weeks, which has been in place since the fall, will be doubled to one free test per week. Testing will remain voluntary and can be done in doctors' offices.

In principle, the existing contact restrictions remain in place. The rule remains: one household plus one other person. Parallel to the extended Kita and school openings then also count in Hesse - similar to many other states - children under 14 years thereby not.

In the retail sector, the states must make uniform regulations to prevent day tourism between neighboring countries. "The extension of the lockdown - with the exception of hairdressers - is both necessary and a bitter blow to our economy. The situation in the catering, retail, events and exhibitions and leisure industries, as well as in arts and culture, is very serious. It is therefore all the more important that the disbursement of aid continues to move forward and that applications for bridging aid III can now finally be submitted," said Economics Minister Tarek Al-Wazir. "It has taken far too long for the federal states to be able to process the applications for November and December aid and to trigger the regular payments after the deductions. In the meantime, more than three-quarters of the applications for November aid and just under a third of the applications for December aid have been finally processed in Hesse and the money has been transferred in full." A total of 390 million euros in November and December aid has already flowed to Hessian businesses, 235 million euros to the restaurant industry alone. The first installments of the bridging aid III, which can be applied for since yesterday, the federal government wants to initiate already at the beginning of next week, he said.

"We have managed to successfully and significantly reduce the 7-day incidence through the joint effort of the last few weeks," Klose said. On January 11, the 7-day incidence was 162.5. Today, February 11, it is 65.8. In parallel, the number of people requiring hospital treatment for the infection is decreasing slightly.

On Jan. 12, the mutant variant B.1.1.7 (Great Britain variant) of the Corona virus was detected for the first time in a person from Hesse. A few days later, the Brazil and South Africa variants were detected. Since then, these variants have spread widely in Hesse. It is certain that at least the Great Britain variant is significantly more infectious than the previous form. That means it spreads faster and easier.

"We have to watch this development very carefully. We know from countries like the UK and Portugal the impact this spread can have. Adjusting the next target for 7-day incidence to 35 should be seen in this light. It is important that we do not squander the success we have achieved in lowering incidences," he said.

"Hesse will continue to work on planning perspectives for a safe and equitable opening strategy. To this end, we will incorporate the results of yesterday's consultations into our planning and make a proposal to the federal government for a coordinated approach," the Minister President said. The aim, he said, was to deliberate on such an opening strategy at the next federal-provincial consultations on March 3.

Fundamentally, he said, everyone continued to accompany every piece of freedom with greater care in observing the AHA+L rules. "We all literally have the virus in our hands. Therefore, please heed these simple and effective rules," Kai Klose appealed.