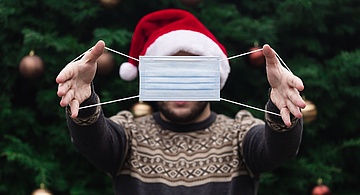 We've already told you about the current hard lockdown provisions HERE. Now the Prime Minister of Hesse Volker Bouffier has once again specified the regulations for Christmas and New Year's Eve. The following applies in Hesse on the holidays:

For gatherings with friends and acquaintances generally applies the current rule also at Christmas: a maximum of five people from two households.

The exception is from Christmas Eve, 24. December, to the Second Christmas Day, December 26: Here are meetings with four people beyond the own household and belong to the closest family circle, so in any case spouses, partners and partners of a non-marital partnership, as well as relatives in the straight line, siblings and their household members, possible; plus children aged up to 14 years. This also applies if this is more than two households or means five people over the age of 14.

Emergency appeal for Christmas at home: compliance with the above rules is also strongly recommended for private celebrations at home.

On New Year's Eve, the general rules for contact restrictions and curfews remain in effect.