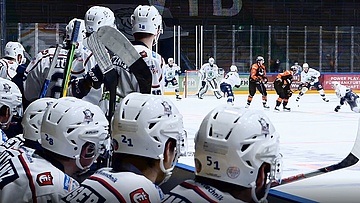 Hessian ice hockey fans get a real treat delivered as of now: In the 4-part docu-series "Es kann nur einen geben", hr-Fernsehen highlights the attempt of the two competing clubs Löwen Frankfurt and Kassel Huskies to move up to the DEL. However, only the champion of the second division will make it. Both Frankfurt and Kassel are qualified for the playoffs despite the premature end of the DEL2 main round. So it's going to be exciting. The first two episodes of the series can be seen in the ARD-Mediathek starting Friday, April 16. hr-fernsehen will then show them on Wednesday, April 21, at 9:45 pm. The third and fourth episodes will appear after the end of the playoffs.

The films of the two authors Sebastian Rieth and Patrick Stricker show impressively and up close how the two old rivals Löwen Frankfurt and Kassel Huskies fight for the return to the first league, and take the viewers into the inner life of the clubs. "Both clubs have made everything possible for us," says Sebastian Rieth. "The insight into the inner life of the teams is unique, honest and incredibly intimate. There were no taboos."

Fixed cameras were installed in the dressing rooms of both teams, players and coaches were given small clip-on microphones during the games, and in total the film team collected over 200 hours of footage. It is there when the Frankfurt players have a good fight after a rough defeat in Kassel and the club sacks the coach only a few hours later. The team accompanies Kassel player Joel Keußen to the dentist because a puck knocked out his front teeth, and directly witnesses how both club bosses fight against bankruptcy due to the Corona crisis.

The contents of each episode:

The first episode deals with the great love-hate relationship that binds the two clubs and their fans. For decades, the dislike between Kassel and Frankfurt, between North and South Hesse has grown. There have been legendary duels and tangible brawls. Derek Dinger, born in Kassel, tells us during a walk in the snow what a return to the ice hockey top flight would mean for the region: pretty much everything! In Frankfurt, Leon Hüttl wants to help the tradition-rich location back into the limelight as a junior national player. In 2004, Frankfurt became German champions - six years later, both clubs went bankrupt and had to start all over again in the amateur sector. This year, after a long time, they can finally return to the first division - a dream come true, especially for the fans. However, they are not allowed to be in the hall, they are at home on the sofa. Frankfurt's stadium announcer Rüdiger Storch is quite lonely in the hall. While Kassel's season is going like clockwork, Frankfurt is in a deep crisis. After a historic 0:7 defeat in Kassel, rude remarks are made. Coach Olli Salo is ticked off.

The Löwen sack their coach the day after the bitter defeat. The documentary is up close and personal. Also, when Kassel's Joel Keußen has to go to the dentist because a puck has knocked out his front teeth. Meanwhile, in Frankfurt, Max Faber is fighting not only for his comeback after an injury, but even for the continuation of his career. From a sporting point of view, the Lions are recovering. They win the third derby against Kassel under their new coach Franz Fritzmeier. But the league is in big Corona worries. There are infections, games have to be postponed, Frankfurt's Martin Buchwieser falls ill and is suddenly no longer allowed to play due to a heart muscle infection. At the same time, the clubs are lacking income, in Frankfurt even more than two million euros. Managing director Stefan Krämer braces himself against the insolvency of the club.

The best season of the year is upon us: the playoffs. It's all or nothing now, and the tension in the dressing room is rising. Who will become a derby hero? Who will have to pull out early? It comes down to the goalies especially, with their crazy masks and strange rituals.

The decision is made. Frankfurt or Kassel - only one can advance to the DEL. The documentary shows the final series up close, is with in the cabin, on the bus on away trips. And of course in the decisive game.