Look and Witness!
from FFM Aktuell 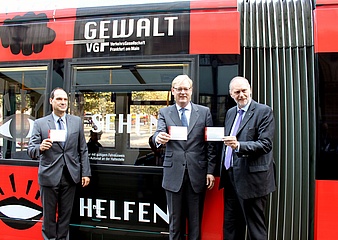 (pia) On Tuesday, 27. September, City Councilor Markus Frank, together with VGF Managing Director and Director of Labor Thomas Wissgott and the Prevention Council of the City of Frankfurt, presented the new witness card at the Römer/Paulskirche stop and distributed it to passengers during a ride on the red "Gewalt-Sehen-Helfen" tram. "The good idea for this came from our head of the office of the Prevention Council Klaus-Dieter Strittmatter and his team," said Councillor Frank with a request to passengers to look actively and closely in the future, for example, when criminal acts or accidents are observed in the city area.

What do I have to look out for as a witness? What is the right way to behave? What can I do? Have I memorized the offender characteristics correctly? The Prevention Council's new witness card provides hints and tips on proper witness behavior. An additional guide helps witnesses to immediately write down the most important perpetrator characteristics of their observation: When did it happen? Where did it happen? Height, age, hairstyle, hair colour, clothing of the persons involved and any special conspicuous features?

The witness card is an initiative of the city's Prevention Council as part of the Violence-See-Help campaign. "We want to raise awareness of civil courage in the city of Frankfurt even more and give citizens confidence in how to behave as possible witnesses," said City Councillor Markus Frank.

The new witness card can also be downloaded from today via the homepage of the Prevention Council or requested by telephone. Further information at telephone 069/212-35443 and at <link http: www.gewalt-sehen-helfen.de _blank>