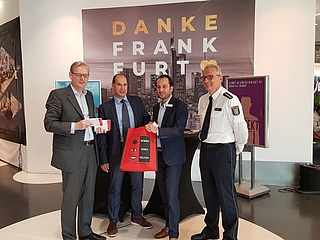 (ffm) City Councillor Markus Frank presented 1000 witness cards to the center manager of the shopping center MyZeil, Marcus Schwartz, on Friday, October 12. The witness card is an initiative of the Prevention Council of the City of Frankfurt as part of the Violence-See-Help campaign.

"Look, help, be a witness - everywhere in our city and now also in MyZeil," said City Councillor Markus Frank at the handover. He elaborated on the preventive approach in the form of the witness cards that wants to be circulated. The witness card is intended in particular to further raise awareness of civil courage in Frankfurt. "Basically, we want to give citizens - even when shopping - confidence in how to behave as witnesses," concluded Frank, the head of the security and public order department. Center Manager Marcus Schwartz expressed his sincere thanks and will request more witness cards from the Prevention Council if needed.

The witness card of the Prevention Council Frankfurt am Main gives hints and tips on the right witness behavior. An additional guide helps witnesses to immediately record the most important perpetrator characteristics of their observation.

The Gewalt-Sehen-Helfen campaign was launched in 1997 by the City of Frankfurt and the Frankfurt Police and stands for civil courage and a culture of looking and helping.