Looking ahead to after the lockdown: A "Frankfurt plan" for the city center
from FFM Aktuell 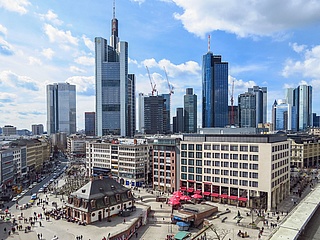 We are still in the middle of the lockdown. And a soon end is unfortunately not yet in sight. Nevertheless, the time after the Lockdown should already be thought of to give perspectives and to develop plans how to continue despite the continuing infection. For this reason, representatives of politics, business and associations met on Thursday, January 14, for a round table on city and district marketing. The initiative of Frankfurt's Lord Mayor Peter Feldmann to revive the city centre after the lockdown with an &sbquo;Frankfurt Plan' was discussed.

This is an extremely difficult undertaking. Because on the one hand, downtown is supposed to be revitalized after the lockdown ends in order to save retail. On the other hand, even after infection numbers are down, spacing and sanitation rules are still hugely important to avoid slipping right into the next lockdown. And the more people are lured into the city center, the greater the risk that the virus can spread again more intensively - even if it has finally succeeded in pushing the numbers to a low level.

Therefore, the planned actions are also to be implemented only if the infection events allow it. Nevertheless, the mayor considers a perspective for the trade incredibly important: "I take the concerns of Frankfurt's traders very seriously. Existences are on the line because of Corona. It is not enough to point the finger at Berlin or Wiesbaden. We have to take action ourselves. The &sbquo;Frankfurt Plan' is more than the sum of its parts. It is about a coherent overall package, a signal of departure for the time after the lockdown. The cornerstones of a concept are already crystallising, which will be sustainable over a period of several weeks and will bring everyone - politics, associations, trade - on board. Now it's time for the fine-tuning. I am convinced: with the &sbquo;Frankfurt Plan' we will win back the people of Frankfurt for &sbquo;their' inner city."

Economic Affairs Director Markus Frank says: "It is good that we are already preparing for the departure to Corona. The goal is to quickly rev up the economic engine in Frankfurt, secure jobs, maintain quality of life for citizens and quickly unleash the international appeal of the Main metropolis again."

The "Frankfurt Plan" - this has already been discussed:

- "Night Shopping" as an event on selected days

- Promotion "Guest in your own city": discounted hotel nights for Frankfurt residents in Frankfurt

- The world as a guest in Frankfurt: A joint pavilion village with city partners such as Tel Aviv, Milan, Prague and Budapest brings internationality to the Zeil

- Implementation of pop-up concepts in case of vacancies

- Cooperation with associations and cultural providers

There was one topic on which there was particularly strong agreement in the round: The special rules for outdoor dining should remain in place beyond March until the end of the year.

At least four weeks in May and June are under discussion as a period of action - always under the condition that the infection event also allows this.

In addition, the participants agreed to examine further measures to additionally enhance the "Frankfurt Plan".

This is specifically up for discussion:

- ÖPNV action - at reduced prices to the city center, possibly flanked by discounts in parking garages, for example two hours of free parking on certain days

- The "Frankfurt voucher": If you spend a certain amount, such as 75 euros, you can get a voucher for the museums or the zoo, which have also reopened, perhaps as a 2-for-1 coupon. Also conceivable are discounts for the attractions at Frankfurt's folk festivals, if these can take place again

.- Anchor point concept for central places such as Goetheplatz, Rathenauplatz, Rossmarkt, Hauptwache and Konstablerwache is being developed

Mayor Feldmann also suggested thinking about expanding the Christmas market to the Zeil. This would give the showmen an additional income opportunity after Corona and the Zeil would be one attraction richer in the Christmas business 2021.

In what form these additional measures will be implemented, is to be discussed at the next round table, probably in February.

Then the "Tourism 2030 Master Plan", which is currently undergoing final coordination, is also to be a topic.

Feldmann said: "Shopping facilities in the city centre are a central field of action if we want to emerge stronger from the crisis. Frankfurt is already attractive for tourists. But we must not rest on that. We must ask ourselves: Where can we do even better? The Tourism Master Plan will provide answers to this question. Moreover, it is an advantageous template for a downtown concept to be developed that will show us opportunities in change."

Participants of the City and District Marketing Round Table: