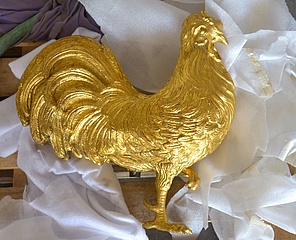 (kus) In the spring of 2018, the "Brickegickel" is to return to its traditional place on the Old Bridge. This was announced on the sidelines of a visit by the mayor and the chairman of the bridge building association on Monday, May 29. It will return to its ancestral place in the middle of the bridge.

According to legend, the master bridge builder did not finish his structure on the agreed schedule. So he sought assistance from the devil. He had to promise the devil that the first living creature to cross the bridge would be sacrificed to him along with its soul. The cunning builder let a cock run over the bridge, the devil grabbed it and angrily disappeared.

In honour of the cock, the Brickegickel was placed on the bridge, in several senses as a sign of mindfulness. Is here not only the Main deep with strong current, the place was also used as a place of execution. It is altogether the sixth Brickegickel in the Frankfurt city history. If most disappeared during floods or wars, the fifth was stolen in the nineties.

The Frankfurt landmark is currently being restored with financial support from the Brückenbauverein. Professor Christoph Mäckler of the Brückenbauverein and Frankfurt's Lord Mayor Peter Feldmann visited the Hungener Straße workshop to find out more and thanked the staff of the Office of Road Construction and Development for their work. 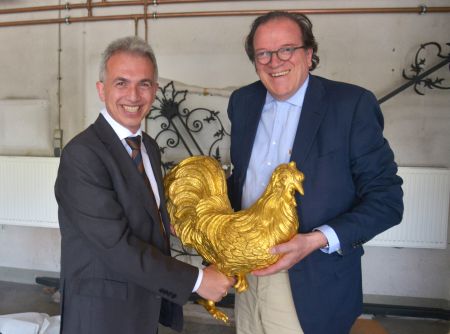