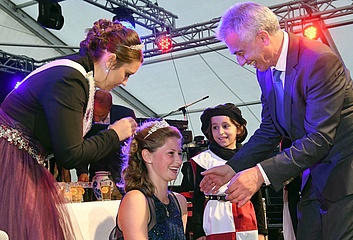 "The Berger Markt clearly sets itself apart from other district festivals and major events. This festival still offers all Frankfurt residents the opportunity to experience a self-confident district culture away from the skyline," said Peter Feldmann about the market, which was documented as a cattle market centuries ago.

The highlight of the festive opening, which was also attended by the head of the district Renate Müller-Friese, is the crowning of the new cider queen. The new cider queen, Nicole I. will represent Bergen-Enkheim at official occasions according to old custom.

Next to the coronation ceremony, the Berger Markt awaits until 5. September also again with a musical stage program organized by the cultural society Bergen-Enkheim.

The conclusion is the high fireworks on Tuesday at 22.00 clock.

More info can also be found HERE in our event calendar