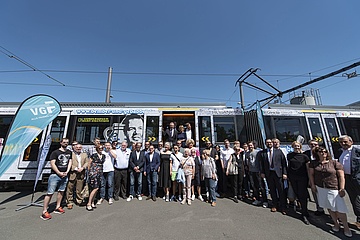 (ffm) The talk show "Bembel und Gebabbel" by Bernd Reisig celebrates great success on the Internet. Since Monday, May 7, a subway with specially designed paint advertises the cult show. The presenter, together with Lord Mayor Peter Feldmann and VGF Managing Director Thomas Wissgott, presented the railcar in the eye-catching livery. In doing so, Feldmann praised the cooperation between Stadtwerke Verkehrsgesellschaft Frankfurt (VGF) and "Bembel und Gebabbel".

The U5 type carriage is 50 metres long, features the likeness of the cult presenter and advertises the show with gaudy slogans. It will roll on Frankfurt's rails in this outfit for the next three years. This is made possible by a cooperation between the VGF and the Internet show, which represents typical Frankfurt lifestyle. The transport company is thus helping the media offering and the foundation behind it, "helfen helfen" (help), to become even more popular and is benefiting in return through advertising opportunities.

"In new German we call this great cooperation a win-win situation," said the Lord Mayor at the East depot. Feldmann has already been a guest on the talk show himself. He found Reisig to be a "funny, quirky and charming host" who always managed to coax information out of people in casual conversation. The show's appeal is evidenced by the names of its guests. Among them were the football manager and original Reiner Calmund, the Prime Ministers Malu Dreyer (Rhineland-Palatinate), Volker Bouffier(Hesse) and Volker Ramelow (Thuringia), as well as Bundestag Vice President Claudia Roth.

"In the digital capital of Frankfurt, &sbquo;Bembel und Gebabbel' is just the right show - a successful Internet talk show with local color," Feldmann said. "I'm sure even more people will tune into the show now that the &sbquo;Bembel und Gebabbel' train is travelling through Frankfurt," the Lord Mayor added. "I am delighted that my successful talk show now even has its own subway. Together with the VGF and my Bernd Reisig Foundation, we will also plan some actions in the coming months," the presenter said