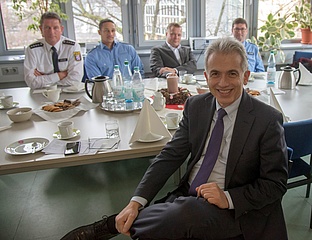 (kus) Following a good tradition, Lord Mayor Peter Feldmann visits the Frankfurt police between the years to thank them for their work on behalf of the citizens of Frankfurt.

This year, two stops were on the agenda: Police Vice President Walter Seubert accompanied the Lord Mayor on his visits to the Traffic Safety Directorate, based at police headquarters on Adickesallee, and the Mitte Police Directorate on Gutleutstraße.

The talks focused on the current challenges facing police officers. From traffic education to drug trafficking, numerous aspects of police work were touched upon. During the visit to the Mitte Police Directorate, the focus was on the Special Organizational Structure (BAO) in the station district, which was established at the end of 2016, and its successor unit, the Regional Operations and Investigations Unit (REE), which has over 137 employees.

The Lord Mayor was able to get first-hand information about the current situation and promised to take the concrete suggestions of the experts to the magistrate: "In particular, the continuous care of drug addicts, also at night, discussed by the task forces, seems logical to me. We will look into this."

"Hopefully the time of overlapping competences is over. Together, we are permanently on the spot to ensure the safety of Frankfurt residents and all visitors to the station district. My thanks go to the Hessian Minister of the Interior, the 137 police officers are now permanently on site. Their task is a great challenge. It is not about quick headlines, but about the permanent enforcement of the rule of law in all parts of our city. Frankfurt itself is also responsible for this. With the master plan of the head of public order Markus Frank, with the increase in cleaning intervals through the cleanffm program, through an even better lighting concept by the head of planning Mike Josef and through the significant structural upgrade of the station by Deutsche Bahn AG," said the Lord Mayor.

In this context, Police Vice President Seubert emphasized, "We are in close exchange with the Health Department. In the coming year, we will hold further talks on specific options for accommodation and care."

But in addition, the tense situation on the housing market was also addressed. The Lord Mayor held that "Our police officers make an indispensable contribution to the safety of our city. The high rate of colleagues who have to commute in from outside because they can no longer find affordable housing in Frankfurt is a good example of why our municipal housing associations are drastically increasing the proportion of affordable housing for the middle class."