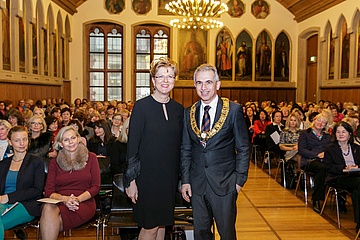 The IWC, which was founded in 1946 by the Frankfurt teacher Elisabeth Norgall, is a non-profit, politically and religiously independent association of women whose aim is to overcome divisions between nations and cultures through contact and mutual acquaintance, to develop understanding for one another and thus to contribute to peace and friendship in the world. Shortly after its founding in 1946, the IWC began to help the unemployed who were looking for work and to support the needy. Today, the IWC's diverse social activities have grown beyond the borders of Frankfurt and over the years have been able to alleviate small and large needs of needy people at home and abroad.

"In order to be able to realize this work we need the financial support of the guests, through the annual collection of donations at the Christmas Tea," says the president of the IWC Susanne Held. The donations from the Christmas Tea go to the working groups for the senior citizens' homes Kronthal and Hohenwald as well as the Mosaic School.

Lord Mayor Peter Feldmann praised the ladies in his welcoming speech for their social commitment. "The members of the International Women's Club Frankfurt stand for the cohesion of this city. Being there for others creates community. In Frankfurt, people from 175 countries live together peacefully. Integration is certainly easier here."