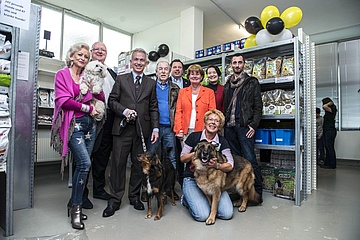 (kus) On the occasion of the Tiertafel's anniversary, Lord Mayor Peter Feldmann presented a donation on Sunday, May 7. He honored the achievements of Tiertafel with a quote from SOS Kinderdorf founder Herman Gmeiner: "Everything great in our world only happens because someone does more than he has to, so I would like to describe your work", said the mayor to Conny Badermann, chairwoman of Tiertafel.

The Frankfurt Tiertafel regularly distributes food to the needy and supports needy pet owners with veterinary bills. 8000 euros are needed for this every month. Therefore the Tiertafel is always dependent on donations. The Tiertafel receives support from prominent sponsors such as Bäppi La Belle, who collects for the Tiertafel every year during his appearance at the cider festival, or from the comedy duo Badesalz.