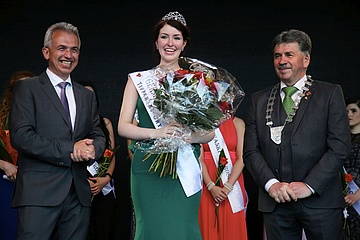 (kus) High above the Main and the castle tower in front of their eyes, festival president Peter Feldmann and patron Jürgen Vormann, together with the chairmen of the Höchster Vereinsring Claus Cromm and Christoph Brum, opened the 61st Höchster Schlossfest opened.

"The renovation work that has finally begun in the Bolongaro Palace left no room for the traditional opening party in the palace garden. Thanks to the good cooperation of the Höchster Vereinsring, the participating clubs and the Neues Theater Höchst, this year the opening was simply celebrated on the palace terrace as part of the Summer Nights at the Palace", explained the Lord Mayor.

The great response from the elected officials, the guests of honor and the visitors from far beyond Höchst gave those responsible a first-class certificate. Patron Jürgen Vormann was enthusiastic and thanked the creative and hands-on Schlossfest organization team.

Claus Cromm referred to the new requirements for security around the Schlossfest and asked for understanding for the different concepts, which of course changed the image of the festival. "We are indebted to the city of Frankfurt, especially to the public order office. Without the assumption of the costs for the extra security, we would only have been able to host a Schlossfest on a budget," said the chairman of the Höchster Vereinsring.

The Lord Mayor was also very pleased about this and had special praise in store for his Magistrate colleague Markus Frank. The additional costs were made available from the new pot "Frankfurter Feste sichern" (securing Frankfurt festivals): "Our Frankfurt does not let celebrating, everyone can be prepared for that", the Lord Mayor made clear.

The motto "Höchst goes Kerry - everything in butter" stands for the friendship with the Irish guests from County Kerry, Peter Feldmann expressed his pleasure with the castle festival partners.

As a highlight of the evening, the German "Rose of Tralee" Anne Sullivan was then crowned in front of a large backdrop.

More info about the castle festival can be found HERE