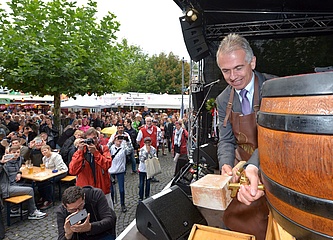 Still being celebrated until Wednesday in the &sbquo;merry village'

(kus) The Bernemer Kerb, originally the Bornheimer Kirchweihfest, is one of Frankfurt's oldest and most traditional festivals and has been celebrated since 1608. In 2007, the people of Bornheim celebrated this event for the 400th time.

Lord Mayor Peter Feldmann said in his opening speech, "I am impressed by the tradition. It shows that even after centuries of belonging to Frankfurt, the districts have retained their own face, their own identity. On behalf of the city of Frankfurt, I would like to take this opportunity to thank everyone who prepares the folk festival and preserves this custom."

Before that, however, a horse-drawn carriage and a large procession took the people through the streets of Bornheim to the opening ceremony with the tapping of the barrel beer on the Kerbeplatz.

On Kerbe Sunday, according to old tradition, the "Gickelschmiss" (cock-beating) takes place in the afternoon, an amusing spectacle in which the participants have to hit a "Dippe" (clay pot) blindfolded and with the help of a flail. Whoever smashes the pot gets a live rooster as a prize.

It is not until Wednesday, August 16, that the so-called "Lisbeth Burning" heralds the official end of the Bernemer Kerb. The Lisbeth, a doll that was tied high up on the Kerwe tree as a patron saint and watched over the festival the whole time, will now be symbolically burned. Until then, however, there will be live music, Frankfurt specialties and social gatherings along the Obere Bergerstraße.