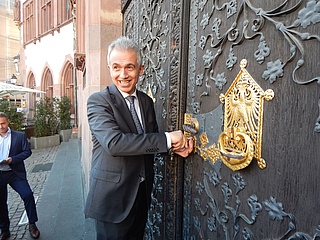 At 4 p.m. sharp, the time had come: Lord Mayor Peter Feldmann took the key and unlocked the doors to the Römer for interested citizens. Here, for two days, offices, parties and city councillors present themselves in order to enter into dialogue with the citizens, to inform them about their fields of work or to show in which projects Frankfurt citizens can directly participate. Of course, the whole thing should not only be informative, but also entertaining, which is why there are many great actions in addition to numerous booths, <link https: www.frankfurt-tipp.de ffm-aktuell s ugc die-tage-der-offenen-tuer-im-roemer-bieten-einen-vielseitigen-blick-hinter-die-kulissen.html _blank>About which we had already informed you HERE.

After opening the doors, the event was officially opened at 7 pm by Mayor Peter Feldmann and City Council Chairman Stephan Siegler. Together, Frankfurt's city leader and the city's first citizen welcomed those present to the Ratskeller of the Römer at 7 p.m.

(kus) Feldmann and Siegler wished their guests eventful and informative days in the heart of Frankfurt's city administration.

"More than 30 offices and institutions present themselves in the Römer- and the Schwanenhalle. From the Children's Office to the Aircraft Noise Protection Unit, from the Public Order Office to the Historical Museum," Peter Feldmann underlined the diversity of the supporting programme on offer.

"I am particularly looking forward to the many conversations with the citizens present and the first Römerdebatte, in which Frankfurt schoolchildren will compete for the prize of the city council president," added Stephan Siegler.

After the open days on Friday continue until 9 pm, visitors can still expect a varied entertainment and information program on Saturday, October 28, between 10 am and 6 pm. Under the motto "Frankfurt - City of Citizens", the individual departments of the city administration, the parties represented in the Römer, as well as the City Council and the Magistrate of the City of Frankfurt will present themselves at 44 stations.

In addition to guided tours of Römer Town Hall and Römerberg, the programme also includes the presentation of the Golden Book, in which numerous celebrities from politics, business, culture and society have signed their names, as well as an extensive children's programme.

For security reasons, visitors to the open days are asked to refrain from bringing luggage and backpacks. Light luggage can be deposited at Römerberg in a luggage bus

The full programme for the Open Days is available on the website <link http: www.einblick-ins-rathaus.de _blank>