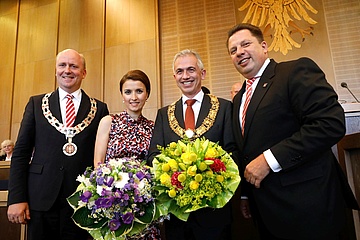 During the city council meeting on Thursday, June 21, Mayor Peter Feldmann was inaugurated into his second term. In his inaugural speech, Feldmann highlighted the city's international character and its openness to the world. He cited the new old town as a good example: "A Turkish-Portuguese bakery. A restaurant with Hessian cuisine. They and others join the Schirn Caf&eacute; whose cuisine is marked by Arab-Israeli influences," Feldmann said. "The diversity, it will be palpable when we officially open the Old Town in September."

Frankfurt as a city of diversity, however, is also a mission, Feldmann added. A mission to go to the edges of the metropolis and take people with us. A mission to create a "city for all", in which children as well as older people can move around safely, in which there is affordable housing, which offers excellent educational opportunities and in which there is generally togetherness and not antagonism. This is the image of an ideal city - and Frankfurt should come a little closer to this image in the coming years. Feldmann referred to the successes that have been achieved in recent years and formulated his goal for his second term in office as follows: "My goal is to make Frankfurt a home for even more people in the coming years. To get even closer to the goal of the ideal city for which I have been fighting for the past six years."

For Feldmann, it is quite clear what the future of the city must look like in order for Frankfurt to live up to the vision of an ideal city: "Frankfurt will grow. Whether with or without us. This is a process that cannot be stopped," said the Lord Mayor. "But it is a process that we must shape. This is not a task for a Lord Mayor alone, not for a magistrate alone, not for a city parliament alone. It is a task for all people in this city. Together we must make this Frankfurt our Frankfurt. An ideal city. That's why I'm asking for your help today. Everything in a city is made by people."

With the call "Let's take the future of this city into our hands. Together. For Frankfurt", Peter Feldmann ended his speech to great applause, thus entering his second term as Lord Mayor of our city