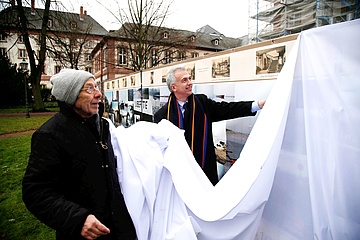 (kus) Together with photo artist Jürgen Wiesner, Lord Mayor Feldmann unveiled the art project "At the foot of the Bolongaro Palace" at the garden-side construction fence. "We will thus be able to present the photos of the Höchster Mainufer as well as the historical photos from the palace to the visitors of the garden in the next few years. Jürgen Wiesner quickly convinced me of his idea for this project at a citizens' meeting. The result is something to be proud of. Older Höchst residents will certainly remember their own experiences of the Mainufer and the former Höchst town hall again as a result," Feldmann was pleased to say on Monday, December 4, at the presentation of the project.

Jürgen Wiesner also gave his impressions. "Thirty-five years ago there were still real winters. To the old ferry belonged the special sound of the V-belt engine, the water cottage captain hoisted the flag early in the morning," he revelled in old memories.

During the tour of the Bolongaro Palace, the visitors were amazed at how far the building fabric had already been interfered with in some places. In this regard, the Lord Mayor explained that after the protection of all sensitive components - such as the historic floors, stairs, railings, lamps - the electrical and sanitary installations were completely removed. Some walls and ceilings have already been demolished. Space has been made in the central risalit for the new escape staircase and lift.

"It is expected that the crane will be erected in front of the building in January, and if the weather cooperates, work on the roof can begin. In addition, access to the garden will be possible again in February," the mayor continued.

Michael Schumacher, architects schneider+schumacher Planungsgesellschaft mbH, knows how to deal with the condition of the building. "We have a long planning phase behind us and are now actually making the first interventions." For example, six existing windows in the courtyard were sawed out for the new access doors. The new event hall, music hall, restaurant and Bolongaro Museum will bring new radiance to the historic building. "Our Bolongaro Palace will be a gem," the mayor expressed his conviction.