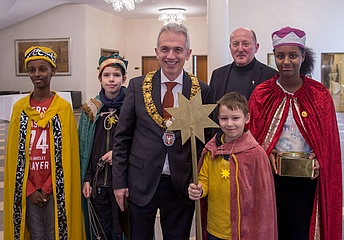 It's a beautiful tradition that every year at the beginning of January thousands of children travel around the country to collect money for children in need as carol singers. 2018 marks the 60th anniversary of the campaign, which began in 1959. And that really is a reason to celebrate, after all, the Epiphany is now the world's largest solidarity campaign in which children get involved to help children in need. The carol singers have collected more than one billion euros since the start of the campaign, and more than 71,700 projects for disadvantaged children in Africa, Latin America, Asia, Oceania and Eastern Europe have been supported during this time. Respect for this great success of an action for a fairer world.

"Bringing blessings, being blessings. Together against child labour - in India and worldwide!" is the motto of the 60th Action Epiphany Singing, the target country is India. For Lord Mayor Peter Feldmann it is always a very special honour to receive the young carol singers in the Römer: "One of the first receptions in the Kaisersaal of the new year is also always one of the most beautiful: the children come to our town hall from many parts of our city and bless our Römer. With the chalk sign 20*C+M+B+18, the girls and boys in the robes of the Magi bring the blessing &sbquo;Christ bless this house' to the people, collect for disadvantaged children all over the world and thus become a true blessing themselves. Can there be a more beautiful date at the beginning of a new year? Certainly not, which is why I am so grateful to our Catholic Church for their dedication to this tradition in our hometown. In addition to collecting the money, the children of our city also use this campaign to draw attention to the great need that is a daily reality for many children around the world. It is about fighting child labor, abolishing it, and implementing compulsory education everywhere in the world. Frankfurt's children are standing up for the children in India, collecting money for their good future, setting a sign of solidarity that will remain in our memory far beyond the beginning of the year."

City Dean Johannes zu Eltz, who was also present at the reception, added: "Justice brings about peace. Our children have a keen sense of injustice. That is why the carol singers raise their voices for others who have no voice. Children who are forced to do hard labor, in time, say nothing. They become muzzled. This year, the carolers are calling to our conscience that child labor is injustice. We must not profit from it."