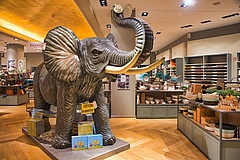 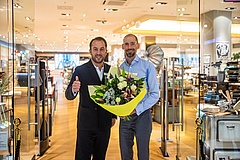 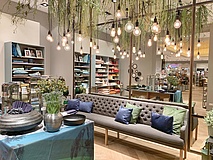 A real traditional company has moved into the shopping center MyZeil: Lorey is opening a new chapter in its over 224-year history with its new flagship store in MyZeil from 05 September 2020. The new location is just a few metres as the crow flies from the previous store on Schillerstraße / Große Eschenheimer Straße, but the move marks a much bigger change. This is reflected not only in the fact that, compared to the previous location, only about half the space is available. For Philipp Keller, the owner of the traditional Lorey store, it was clear: "We wanted to create a store in which everyone feels comfortable and which invites people to linger." And this has been achieved very well in the approximately 1000 square metres of the new sales area.

It is immediately apparent: Lorey wants to reposition itself and present itself in a fresh way. Therefore, the design of the store has been a very important factor for Keller. Together with architect Shadid Sadiq, Philipp Keller has travelled through several trend metropolises, such as Amsterdam, Paris, Copenhagen and most recently London. There, many inspirations could be collected, which have now been individually implemented in the shop at MyZeil. "Warm, English colours" played just as big a role in the implementation as timeless design. The result is a refreshingly new Lorey style, which is neither modern, nor traditional, but quite simply Lorey-individual.

Now one may wonder why a downsizing of the sales area and the abandonment of premises with a tradition of more than one hundred years were carried out. No question: the old location in Schillerstraße/Große Eschenheimer Straße was excellent. The premises themselves, however, were no longer so. The confusion of the five sales floors had many disadvantages for customers as well as for employees. The offices as well as the storage areas were also spread over several levels, so that profitable management in the old premises was no longer possible in the long term. The need for investment in the company's own building would soon have become too great and a major rebuild would not have brought any lasting improvement. There was only one logical consequence: the abandonment of the old location after more than 100 years and a move to new premises!

"This step was not easy. However, I am convinced that it is the best and most sensible way. In MyZeil we have the unique opportunity to redefine the traditional business Lorey and to present ourselves in a more contemporary way," says owner Philipp Keller. But even on the new paths, Keller wants to remain true to the traditions. After all, Lorey has been the address for all products related to cooking, baking and living in style since 1796. The company was founded in Frankfurt and is now run by the 7th generation of the family. Therefore, tradition and origin will continue to play a major role. It fits perfectly that the new flagship store actually stands in almost the same place where Lorey was already at home on the Zeil in 1904.

Here you will find only favorite pieces

But also the new philosophy of the house Lorey is based on a tradition that has always proven itself. For Lorey is known for placing the greatest emphasis on quality in its assortment. And so only "favourite pieces" will continue to be available here, which increasingly come from smaller manufacturers. In addition, customers should be assured that all their questions will be answered and plenty of tips given here so that they can successfully cook, invite, furnish, spoil, give away and, above all, enjoy with passion.

The elephant in the china shop and Lorey - an unexpected friendship

New is also a real eye-catcher - an elephant in a china shop. The reason for this is the Corona crisis. Because during the involuntary closure period, owner Philipp Keller took the time to write the story of the elephant in the china shop. Frankfurt illustrator Claas Janssen illustrated the story with great attention to detail. The result is a charming book that is available for 10 <x>ampersand</x>euros; only at Lorey in the shop.

Lorey has repositioned itself in the age of digitalization and online shopping, they have moved even closer to the needs of their customers. Time is becoming an increasingly precious and limited commodity. Service and advice are becoming important again and stand up to the anonymity of the internet. That is why Lorey offers, among other things, personal shopping advice, at the customer's preferred time of course. In addition, Lorey has created a comprehensive package for customers with special events such as "Late Night Shopping", a worldwide delivery service and the wish list service.

All many good reasons to pay a visit to the new flagship store on the 1st floor of MyZeil and browse through the over 85,000 products.

Assortment: Divided into the categories: Home Accessories /Home Textiles / Storage & Household Care /Cooking, Roasting & Baking /China, Ceramics, Glassware & Cutlery. No longer will there be household cleaning equipment and small electrical appliances, although these can now be ordered in-store from many reputable manufacturers and - as a special service - delivered direct to your home.