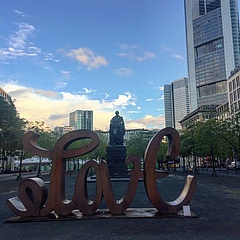 Many know it from the Senckenberganlage, where it has long been a popular photo motif. But now it has moved into the heart of Frankfurt's city centre for a while: the sculpture "LOVE HATE" will be on display on Goetheplatz until the European elections on 26 May, to promote the highest possible voter turnout. Lord Mayor Peter Feldmann together with artist Mia Florentine Weiss unveiled the sculpture at its new location on Europe Day, Thursday, May 9.

For Lord Mayor Feldmann, the sculpture sends an important message in light of the current political mood. "Only when you move away from hate do you see love. We have to internalize that in everyday life as well. It often takes more effort, more courage to encounter, more curiosity to come to love," says the city leader. He adds: "The world is made by us to be what it is. Whether love or hate wins, that is our choice. I hope that in the European elections right-wing arsonists do not celebrate a victory!"

"Europe is love and the greatest peace project of our time," the artist describes her motivation. "We must work to preserve the European idea, strengthen it and turn the pervasive hate into love," she adds. Indeed, the two words are the key elements of the letter artwork. If you stand in front of one side of the floor-to-ceiling sculpture made of rusty brown metal, you can read "Hate." Seen from the other side, this lettering results in "Love". This interchange and wordplay is meant to challenge the viewer to reconsider his or her point of view.

Feldmann also addressed the bet with his Cologne colleague Henriette Reker. The latter is betting that the city on the Rhine will achieve the highest voter turnout on May 26. Feldmann counters that for Frankfurt, betting that Frankfurt will have relatively the most people exercising their right to vote. "People stop, look at the sculpture, take selfies and share them. The artwork goes viral that way. I want Frankfurt to have the higher voter turnout," says the city leader.

Also in other German cities such as Berlin and Erfurt are "Love-Hate" sculptures, some of which go on tour through the Federal Republic and Europe. The action under the tag #LOVEUROPE for democracy, humanism and the European idea will continue after the election.