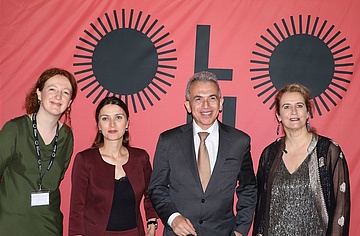 Patron Peter Feldmann, Lord Mayor of the City of Frankfurt am Main, opens the 39th. Edition of the film festival

It's finally underway: numerous guests celebrated the opening of LUCAS International Festival for Young Film Fans (18 to 25 September 2016) on Sunday afternoon in the packed cinema of the Deutsches Filmmuseum, Frankfurt am Main. For the 39th edition, many things are new at LUCAS this year. Germany's oldest film festival aimed at young audiences, organized since 1974 by the Deutsches Filminstitut, Frankfurt am Main, is addressing a much broader target group from four years old to 18plus with a new name. LUCAS offers a coordinated film programme in three age groups (4+, 8+ and 13+). There are four competitions: in each of the age groups 8+ and 13+ a long film prize is awarded, as well as a prize for the best short or medium-length film. Participation, always a strength of the festival, will be expanded under the motto "Mitmischen!". Thus, children and young people are not only involved in all juries as before, they also help shape the festival and thus make it their own, for example in the selection of films and the preparation of film discussions.

This was also praised by the patron of the festival, Lord Mayor Peter Feldmann: "I am very pleased that the festival, under the artistic direction of Dr. Cathy de Haan, actively involves children and young people. The fact that many of the festival's films deal with flight and intercultural issues shows that LUCAS is at the cutting edge of the times. This theme also sharpens the young generation's understanding of our current political situation."

LUCAS is highly topical, according to Dr. Ulrich Adolphs, Head of Department at the Hessian Ministry of Science and the Arts, who conveyed warm greetings from Science Minister Boris Rhein: "LUCAS enriches the film and cinema culture of Hesse and thus occupies a very outstanding place in the so extensive festival landscape. We applaud the commitment of all the organizers and volunteers, because without their cooperation it would be impossible to put something so great together. We are very proud to be able to host this international showcase in the children's film sector here in Hessen. That is why the Hessian state government has been sponsoring this event for many years. This year, too, we are contributing 30,000 euros."

The entire spectrum of film history determines the qualitatively demanding feature-length film program. In this way, Christine Kopf, whose Film Education and Outreach department now includes the festival, and Artistic Director Cathy de Haan deliberately set themselves apart from the premiere focus of other festivals: "We want to infect children and young people with our enthusiasm for cinema," the two emphasized at the opening.

"That's why we show films that we are convinced will arouse curiosity and passion in the young target audience."This includes not only current films from around the world, but also classics of film history and, of course, works that are not explicitly labeled as children's or youth films. "We believe that adolescents are interested in the whole range of international cinema," says de Haan. As a result, premiere status is no longer a prerequisite for participation in the festival: "Many wonderful international films don't find distribution in Germany that means those who don't attend the Berlinale or other festivals never get to see these films, and we would find that a shame." Sixteen feature-length films are in competition, including the opening film RAUF (TR 2016, Dir: Baris Kaya, Soner Caner) about a nine-year-old boy growing up in the civil war zone in northeastern Turkey. The film has just been shortlisted for the European Film Awards. The same goes for SPARROWS (Sparrows, IS/DK/KR 2015, R: R&uacute;nar R&uacute;narsson), which tells the story of Ari, a young Icelander growing up with his alcoholic father.

Also in the LUCAS short film competition, now expanded to a "competition for short and medium-length films" with a total of 26 works, there is much to discover, for example KONINGSDAG (King's Day, NL 2015, R: Steven Wouterlood), in which Kelvin and Younes identify music as a unifying element, the football film SLUSH ICE (Water Ice, DK 2016, R: Sören Grinderslev Hansen) or WATER BABY (IN 2016, R. Pia Shah) in which the director shows how shy Melvin overcomes his fear of water.

The juries, composed equally of young film fans and industry professionals, will award the prize for the best feature-length film (5,000 euros) and the prize for the best short or medium-length film (2,000 euros) in the age groups 8+ and 13+. Among the feature-length films in the 13+ age group, the SIR PETER USTINOV AWARD (2,000 euros) will also be presented. In addition, there will be an audience award without prize money. A jury of the ECFA (European Children's Film Association) will be present.

A special focus of LUCAS will continue to be the meetings with filmmakers from all over the world. Children and young people sometimes take over the moderation themselves and help to shape the course of events. In the run-up to the festival, children from the Karmeliter- and Weißfrauenschule as well as from the International Children's House (all in Frankfurt's Bahnhofsviertel) and the Strothoff International School in Dreieich have already dealt with the subject of film in workshops supervised by LUCAS, made their own films or prepared film discussions. LUCAS offers further manifold possibilities for the adolescents to participate, says Cathy de Haan, who is already looking forward to the award ceremony of the festival. For this, young people from an intensive class will work together with composers and musicians Eunice Martins and Laura Mello to create an experimental film score and perform it live.

With Young European Cinephiles, there is a new section at LUCAS: young people between 16 and 18 from all over Europe curate the programme themselves. The idea: two young adults each from Italy, France, Germany and the Netherlands programme a double feature with coordinated content, which runs on four LUCAS evenings at 18:30 and 21:00. This of course includes the rationale for the selection, moderation and introduction on the screening evening. Claudia Dillmann, director of the German Film Institute, is pleased that the young people from the European partner institutions, who have been trained in film, "looked at the entire history of film in their selection and also drew on film classics for their programmes."For example, the dystopia BRAZIL (GB 1985, directed by Terry Gilliam), which is still highly topical 31 years after its premiere.

For the youngest cinema-goers in the 4plus age group, the festival is bringing award-winning programmes of animated short films to the screen. Among them is MAA BAA (DE 2015), a film by Ahmad Saleh, 2016 Student Oscar® winner.

Films from 27 countries will be presented in the internationally oriented festival programme, either in the original language version or with German dubbing. Numerous filmmakers from all over the world are looking forward to intensive discussions with the young audience.

A three-day international conference and future workshop on "Film, Flight and Interculture" is being organized by the German Film Institute and the Federal Agency for Civic Education (bpb) in cooperation with the Goethe-Institut to accompany the festival from 21 to 23 September 2016.

LUCAS International Festival for Young Film Fans is made possible by numerous sponsors, for whose support we are grateful. These include the City of Frankfurt am Main, the Federal Government Commissioner for Culture and the Media, the Hessian Ministry of Science and the Arts, HessenFilm und Medien, the European Union (Creative Europe), the Peter Ustinov Foundation, the Hessian State Agency for Private Broadcasting and New Media, traffiQ, Fraport AG, the Friends of the German Film Institute, Fazit Foundation and Vision Kino. Our thanks also go to our partner ABG Frankfurt Holding as well as our mobility partner &Scaron;KODA AUTO Germany.

On presentation of the CleverCard, visitors receive a discount of one euro on the regular admission price at the cinema box office (except in Wiesbaden).